There have been many fun, frustrating, and let's say interesting times this past year in the service industry.  I have narrowed them down to my 2013 Service Industry Top 5 Moments. 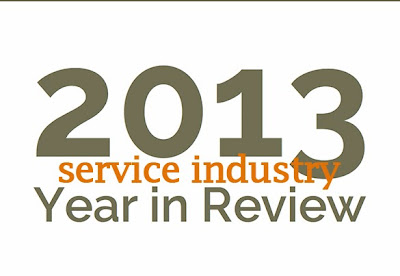 Some of these moments are from my own experiences this past year, and others are from around the country.  Let's get started.

NUMBER 5
This actually was the most recent thing that happened this year.  Dayna Morales, a 22 year old server from New Jersey claimed a couple wrote on the credit card slip that they appreciated her hard work, but couldn't tip her based off of her gay lifestyle choice.  She posted the slip online and it quickly gained lots of attention from the news and other online sources.  People even began to send Dayna compensation for her lost tips in the area of thousands of dollars.  (Huh?  Maybe I should start posting some slips saying I got stiffed because of some of my choices in life.)  But the Internet came back to bite Dayna in her ass because the alleged couple came out of the woodwork with proof that they actually did tip Dayna, and the homophobic remark on the credit card slip was not their handwriting.  The restaurant quickly suspended Dayna pending an investigation.  That investigation meaning, "dust off your resume, you're being fired!"

NUMBER 4
Nobody loves tips more than a service industry worker.  But now we love them more if they are from Jesus.  No, not the busser Jesus, but the son of God himself.  This group of financial do-gooders, TIPS FOR JESUS, have been going around the country leaving thousands of dollars in tips to unsuspecting servers and bartenders.  (Hello?  My work address is...)  Their motto:  "Doing the Lord's work, one tip at a time."  So now anytime I see one of my customers praying before eating their meal, I give them my undivided attention.  AMEN!

NUMBER 3
Who the hell could forget Alois Bell of the Word Deliverance Ministries and her infamous outing to Applebee's one joyous Sunday afternoon.  After seeing the automatic gratuity on her bill, she scratched out the large party gratuity of 18 percent, and then wrote, "I give God 10 percent.  Why should I give you 18 percent?"  And then she left the server nothing.  Obviously, Alois is not a disciple of  TIPS FOR JESUS, but rather the anti-Christ of that group.  What kind of name is Alois, anyways? ("Fletch" reference.)  Alois got a lot of bad comments and press on the web thingy, and Crapplebee's ended up firing the server who posted the credit card slip which started the whole controversy.  BTW, her large party gratuity was 6 dollars.  Time to pass that collection plate around the congregation again, Alois.  You need more money to tip.

NUMBER 2
Last May, I wrote a post called, 10 WAYS TO GET BETTER SERVICE IN A RESTAURANT.  Little did I know that I had an avid reader who took this list the wrong way.  "Springs 1," from Mississippi, went on a very long, drawn out tirade about how it is "ALWAYS THE SERVERS FAULT, and don't let them tell you otherwise."  For a good laugh, re-read the comment thread.  Springs is a big fan of using caps and "*" to prove her points.  (I'm still confused with the use of "*" though.)  Springs has a certain set of standards on how people should wait tables, and it's her way OR ELSE.  After going through this ordeal with her, I came to the conclusion that Springs and her husband would only be happy serving themselves at home, or if they did have to go out to eat, it would have to be at a buffet.  ("The Encore" buffet in Vegas is the best, BTW.)  She and her husband are also big fans of eating at fine establishments like Red Lobster, or Outback Steakhouse.  Bad news Springs, Red Lobster is going out of business.  Guess you and your husband are going to be slumming it at places like Crapplebee's or Bob's Big Boy for awhile until a new Michelin Star restaurant opens in your neck of the Ozarks.  But maybe this new year you could lose a little weight.  I hear if you cut off your head, you lose ten pounds.

NUMBER 1
What can I say?  Something like this never has happened to me in my 15 year career, and I loved every moment of it.  Of course, I am talking about none other than The Cabernet Heist.  If it's one thing that I learned from a USC frat guy, is that they are persistent in actions, but not consistent with their stories.  While bartending a party at my work for a USC fraternity/sorority function, one guy stole a bottle of wine from the inside bar, and brought it over to my outside bar and asked me to open it.  I didn't open the bottle, but rather I opened a
can of worms on the guy ranging from backhanded compliments, to non-sequiturs, and insults alike.  He claimed that he was the social chair of the frat, and that he paid $100.00 for a bottle of Trinity Cabernet.  And why not $100.00?  It's only $92.00 above the retail price.  Like I told him that night, it's a good thing he wasn't the treasurer or that frat would be broke.  Much like his spirits when I took the bottle away from him and didn't give it back.  But I did give him a chance to buy the bottle at the end of the party... for $100.00, of course.

What a year!  I'm sure next year will be even more eventful.