I thought I had seen it all.  I'm humbled to say that I was wrong, and it was so worth it.  The following happened recently while I was bartending an "exchange" with a sorority and a fraternity from USC.  For those that don't know, an "exchange" is a themed party for frats and sororities at different locations, and usually they act horribly and get drunk and any outsider would see this and immediately weep for the future.

This particular night was no exception...

There was about 250 people at this party.  One bar was inside with two bartenders, while there was an outside bar with one bartender.  I was bartending the outside bar.

The first hour of the "exchange" was a hosted bar.  So the college kids made sure to consume as much free alcohol as their livers could tolerate within the allotted time.  Everybody who was of age was wearing a wristband to ensure no underage drinking, and I was only giving out one drink per wristband.  The free hour quickly went by and I switched over to a cash basis bar.  That's when the fun started.

"Can I get a vodka-tonic?" asked one frat dude.

"It's a hosted bar," the frat guy smugly replied.

"We were told it's hosted for two hours," he argued.

"You should go and find the person that told you that, and tell them they're wrong," I answered.  Then I moved on to the next person.

This went on for quite awhile.  I would hear things like,"now that I'm paying for the alcohol, maybe you can put some alcohol in my drink?  I like them strong."

Which I would smile, pour the same amount of alcohol that I had already been pouring all night but say, "this one is REALLY strong."

Or, I would say that it's a cash bar and some of them would ask if they could use a credit card.  I would say yes.  Then they would tell me, "So you mean it's a CASH and CREDIT bar?"  Because they're going to USC, they thought this was amusing.

"I stand corrected.  It's a 'Payment Bar.'  You pay for the drinks with some form of legal tender.  Probably being your parent's credit card."

Then, suddenly, my dreams came true.  There was a short-frat kid, with glasses, and headband and a crappy mustache who put an unopened bottle of Trinity Oaks Cabernet on my bar.

"I just bought this from the inside bar and they don't have a wine opener.  They said you could open this for me," he said.

I took the bottle and placed it behind me like I was going to help him out.  Then I made drinks for some other people who were waiting before him.  "Shorty" was not a patient frat dude.

"So, are you going to open my bottle of wine?" he demanded.

"I didn't know we were selling bottles at this party?  I thought it was only one drink at a time," I questioned.

"No.  I paid the bartender inside $100.00 for this bottle so me and my girlfriend can have it.  They told me you would open it."

"I left it at home," he said with a straight face.

"You left Hollywood to go back to USC to file your receipt?  That's pretty smart.  Always keep your receipts for your accountant."  Then I noticed that he had three other people who were standing at my bar listening to our conversation, but they were telling me to give him back his bottle of wine.  But I don't get many opportunities like this.  So I continued.  "What did the bartender look like who sold you this bottle?"

"I hate that guy.  He's always doing shit like this," I immediately answered.  But the description he gave does not even come close to what the other two bartenders look like.  "If you can find that bartender and bring him out here, I'll give you the bottle back."

"No.  You stole this bottle.  So it's going to stay here," I told him.  Now his friends still felt the need to stick up for this guy by pleading his case.

"He's a good guy.  Just give him the bottle back," they said.

"I have a lot of money.  I paid for that bottle!" Shorty yelled.

"Well it's a good thing you're not the Treasurer of the frat, because you would have overpaid for a bottle of Trinity Oaks Cab, if you had actually bought it.  And we also don't store our wines at 98.6 degrees.  It feels warm, like it was stuffed under your shirt... when you stole it!"

Now he's fuming.  His friends are still trying to help him out.  "It's only a ten dollar bottle of wine, just let him have it!" they pleaded.

"So you're the smart friend." I said.  "But you should've helped him out by not letting him steal a bottle of wine from a bar, and then bring it to ANOTHER bar.  Remind me never to hire him to be on my heist team.  He would steal money from one bank teller, and then bring the money to the next teller and ask them to make change."

Finally, they left.  But I would continue to see this guy throughout the night.  As if he was still thinking he could steal back the bottle.  So I placed the bottle at the end of my bar to tempt him.  Like a moth, he kept floating by.  He finally left the party when I placed a sign on the bottle. 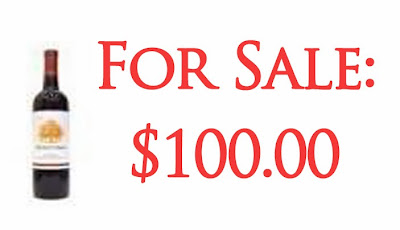 Unknown said…
Joey this is a great post. Just goes to show you that USC students arent all that smart!! (our mom excluded)Take that Shorty!
November 25, 2013 at 12:56 PM

Unknown said…
Great post!! That will teach those trojans!! Obviously going to a private school has not provided the upper edge in communication skills.
November 26, 2013 at 9:46 AM