Tips For The IRS 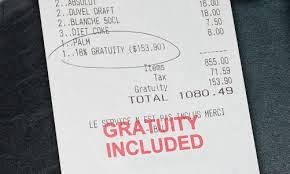 Our friends at the IRS are cracking down on the people who do not need to be cracked down upon... The Service Industry.  Starting in January 2014, the large party automatic gratuity will go away and be replaced as a "service charge," so restaurants will have to report this income and it will be taxed.  What does this mean for many servers?  Most places will probably do away with the large party gratuity and leave it up to the customers to determine the tip for a party of 8 or more people.

Great!  Just what a server wants to hear.  That their tip is being handled by the restaurant they work for and the customers we serve.  Right now, I happen to work at both a hotel restaurant, and a "free-standing" restaurant.  At the hotel, they've moved our tips onto a paycheck so all of our tips are taxed.  At first, it sucked.  But I realized later that it's better for things like trying to get a loan, or to show income by having my tips on my paycheck.  But the other restaurant doesn't do that.  That's what most servers want, because it's up to us to report our tips to the IRS.  Most credit card tips are taxed, leaving the cash tips up to the server to declare.

Not declaring your tips is a mistake.  As a server, I'm not supposed to say that, but it's true.  Like one of my old managers used to say, "You have to declare all of your tips.  It's not the '80s for Christ's sake!"  Which still makes no sense to me considering I wasn't old enough to wait tables in the '80s.  Unless you count setting and clearing the dinner table growing up.  But I was never tipped for that.

The real debate going on across the country is one about wages.  As far as I know, California has the best wages for the service industry.  Minimum wage is $8.00 an hour.  Texas still pays their servers $2.12 an hour, and they've been doing that since the early '90s!  Most customers don't feel like it's their place to have to make up for lousy wages with a hefty tip so us servers can afford to live.  I get where those customers are coming from, but also, it's been a tipping society for centuries.  In the Old West, you would order a bottle of Sarsaparilla from the bartender and throw a giant gold coin on the bar with a (BAM!) and that would be the payment and the tip.  So nothing has changed.

People just want to eliminate tipping all together.  Forcing restaurant owners to offer some sort of salary to it's employees.  That's not a good idea.  Most restaurant owners I know would make that salary very low, and the amount of people working in the service industry would decrease.  It wouldn't be a desirable job anymore.  Not only that but also the prices on menus would significantly go up because that's how the owners would have to pay the salaries.  Causing a huge ripple effect, making going out to eat a luxury for only the upper class.  And they don't need anymore luxuries.