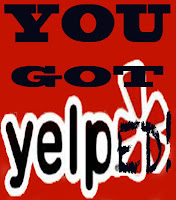 A "good" restaurant experience is not only defined by the food and service, but also by the staff's lifestyle choices.

Meet Chillferd I.  Chillferd, (his parents must have hated him,) likes people who are fit and take care of themselves.  While out at a fine dining establishment one evening, he felt that his server didn't fit into his ideal mold of a human being.


Here is his Yelp review:

"This place needs to hire new staff, (especially the short, chubby guy with a beard and glass.)"
Apparently Chillferd's waiter was Santa Claus.  Santa is hard up for money this year.

"Never had such a rude waiter at a 'fine dining' establishment in my life."
He obviously has never been served by a French waiter before.  (Rim Shot!)

"From the start of the night, he was making condescending comments about our food and drink choices."
But Chillferd, that's offensive to the food and drink, not to you.

"I seriously don't know if this guy hates his life or what!"
Chillferd may be correct on this one.  But it may not be his life that he hates.  The server might just hate you.

"But if you work in the restaurant industry you choose a path of serving and doing your best to make the night a good memory.  That's what you get paid to do!!!  He never had a smile on his face and looked like he had been constipated for 2 weeks."
So now Chillferd is a Gastroenterologist.  Maybe that's why he was making those comments about your food choices.  He was trying to steer you in the right direction.  (Wink! Wink!)

For Christmas, maybe you could wish for a restaurant with a thin waitstaff who is clean shaven, doesn't have any sight problems, and does the "Master Cleanse" often.

I hope Santa will give you everything you want this year.  But he might not have time considering he is still trying to get his Christmas Eve shift covered at the restaurant.