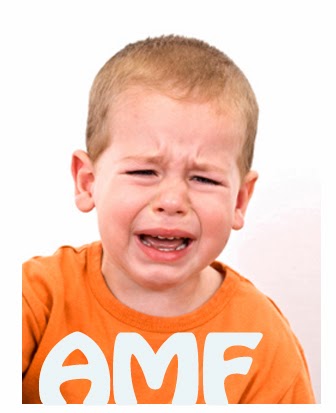 I bartended another fraternity/sorority party for USC again at my work.  I think I might be getting some sort of reputation as a bartender at that school.  Once again, I irritated one of the frat boys to the point of them throwing a tantrum... and I loved it!

This dude comes up to my bar and asks for an A.M.F.  (Adios Mother Fucker.)  Basically a "Long Island Ice Tea," but without the Coke, instead Blue Curacao.  I started to make the drink and I noticed something odd with the guy.  While he's gently swaying back and forth, I see that his eyes are closed.  He was SLEEPING STANDING UP!

I look over at the security guy who was stationed at my bar and give him the "can you believe this shit" look.  He looks shocked.  I put the alcohol bottles down and instead put water in the glass I was using.  The frat dude, who's still asleep, notices nothing.  I then begin to wave my hand in front of the guy's face to see if he's actually out.  He finally opens his eyes.

"I'm fine," he says while looking down at the glass of water.  "Is that all alcohol?"

"Because you were sleeping at my bar."

"Most people don't pass out while they wait," I say.  "It's just common courtesy.  Stick with the water.  You'll be fine."

"My answer is still no.  But congrats on being able to sleep standing up.  That must come in handy in crowded rooms."

Then I turn to the security guy.  "Was he not asleep for a couple of seconds?"  He nods.  "There you go."

He turns and storms off.  Reaches into his pocket and pulls out his wallet and throws it as hard as he can on the floor with a (SMACK!)  Then he stumbles to try to pick it up.

Another security guy comes out of nowhere and picks him up with one arm and throws the kid out.  I'll say this about USC frat guys, they have durable wallets.