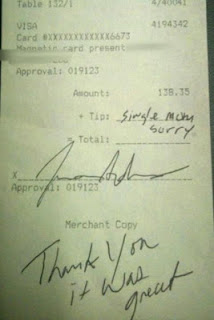 It's ideal for a server to receive 18 to 20 percent gratuity for a job well done.  Now it seems that customers are looking to leave an excuse rather than a monetary tip explaining why they couldn't leave their server any money.  WTF?!!

Of course, because my landlord would love to receive an excuse instead of a check for rent this month. "I don't have the money for rent, because I'm a writer/comedian.  But I adore this building.  So secure."

The above picture was found on Yahoo.com.  One of the comments said that they thought this was an altered pic, but I have actually seen this happen to myself and co-workers.  And by-the-way, what if the server waiting on the woman was a single parent?  So the lady who wrote this has now started a domino effect on their server who is struggling to make ends meet.  And so on, and so on...  Get bent!

I don't believe in saying that if you can't afford to go out, that you should never go out.  There are ways to go out to a nice restaurant, not spend a fortune, and still be able to take care of your server.  (Appetizers and desserts can be shared, for example.)  But saving money by not tipping your server should NEVER be considered.

The above picture's "single mom" excuse is terrible and non-excusable.  Her check was $138.35.  It wasn't going to put her out that much more to tip 18 percent.  Now she has just cast a bunch of bad karma on herself and her child, who is probably already getting beat up and picked on in school.  Oh, but wait, she's a single mom, so she'll just tell that to her child when they ask why they have such bad luck his/her life.

I am not writing this column saying that it is easy being a single parent.  My hats off to single parents, and how hard they have to work.  But you should never make YOUR problems, your servers problem. Go out.  Have a good time.  And tip 20 percent.

Anonymous said…
A few years back I was working in a Capital city and legislature was in session. So, of course, we had a lot of state senators and representatives in the restaurant.

One afternoon, a senator left no tip on her lunch and wrote in "We're on a stipend, sorry!"

Seriously? All she really said was - I don't have to pay for my meals and I'm too cheap to tip.

Anonymous said…
First of all I want to say awesome blog! I had a quick question which I'd
like to ask if you don't mind. I was interested to know how you center
yourself and clear your head before writing. I've had a hard time clearing my mind in getting
my ideas out there. I do enjoy writing but it just seems
like the first 10 to 15 minutes tend to be wasted just trying to figure out how to begin.

Any suggestions or tips? Appreciate it!

Anonymous said…
Great blog! Do you have any tips for aspiring writers?
I'm planning to start my own website soon but I'm a little lost on everything.
Would you suggest starting with a free platform like Wordpress or go for
a paid option? There are so many choices out there that I'm totally confused ..
Any suggestions? Cheers!

Anonymous said…
I'm extremely inspired with your writing abilities and also
with the format in your weblog. Is this a paid subject
matter or did you customize it your self? Anyway keep up the nice
high quality writing, it's uncommon to see a great weblog like this one today..

Anonymous said…
Hello There. I found your blog using msn. This is an extremely well written article.
I'll be sure to bookmark it and return to read more of your
useful info. Thanks for the post. I'll definitely return.