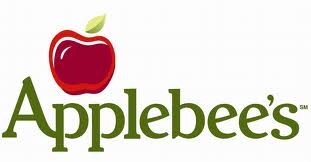 This past week, the Internet has been buzzing about a woman, Pastor Alois Bell of the Word Deliverance Ministries, who decided to leave a smart-ass comment instead of a tip at an Applebee's in St. Louis, Missouri.  The server who got stiffed on the large party gratuity showed the receipt to her co-worker, Chelsea Welch, who then took a picture of the receipt and posted it on Reddit.com. 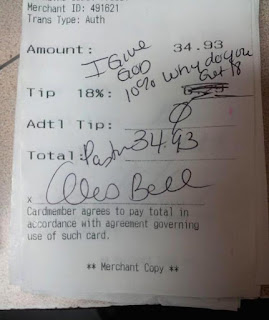 Pastor Bell has been hit hard by Internet junkies who have been emailing and calling her to call her out for her "Godly" mistake.  What does a good Christian woman do?  She calls Applebee's and has Chelsea Welch fired.  Pastor Bell said, "I didn't want it to get so much attention."  Well, you got the attention when you wrote the comment.  In short, you started it.

Many, if not all, restaurants have a policy that states if you have a party of 6, 8 or more, than a large party gratuity of 18-20 percent will be added to the subtotal of the bill.  Large tables are hard to handle for servers and wait staff, so this helps ensure that the servers are taken care of, and of course the customers are allowed to leave extra if they see fit.

Pastor Bell didn't want to pay the large gratuity of 6 dollars?  Jesus, Mary and Joseph, lady!!!  Not only are you tipping the scales on the body mass index, but on decency and karma as well.  Next time you pray to your God at the "Word Deliverance Ministry," maybe he can "deliver" you a soul.  (Which you probably sold for 6 dollars for some extra Jalapeño Poppers.)  This is her lame excuse below:

So I decided to give the Crapplebee's corporate office a jingle, 1-888-592-7753, and after several denials and vague answers, they had the nerve to tell me that the employee had been compensated.

"That particular employee has received compensation for that table," they said.

"How can they receive compensation if they've been fired?" I argued.

"They've been taken care of," he vaguely answered.

"Well, at least she doesn't work for Crapplebees anymore. I consider THAT compensation.  And btw... I hate you."  And as my good friend Lou Santini would say, "conversation ended, I won!"