Kerry Simon Says... It's About the People 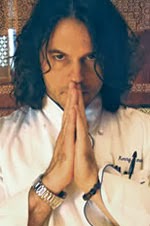 I've worked for a couple of "celebrity chefs" throughout my service industry career.  The one that has made the biggest impression on me is "Rock and Roll Chef" Kerry Simon.  He was named the "Rock and Roll Chef" by Rolling Stone magazine because most of his fanbase are rock-and-roll stars, and other celebrities alike.

Kerry himself looks like the front man of a rock band.  Long hair, easy-going demeanor, and a charisma that the ladies love.  He has many accolades, but my favorite is that he won "Iron Chef America."  I helped open his first L.A. restaurant, "Simon LA," six years ago inside The Sofitel Hotel @ Los Angeles.  It was the busiest and most profitable restaurant I have ever worked at to date.  But no matter how busy we were, Kerry would always make us laugh with his laid back, "What's going on guys?" type of hello's while he would text people from the expo line secretly overseeing everything.

At first, I didn't get it.  I just thought that when you reached that level as a chef, you just watched over the cooks to make sure that they got your recipes right.  Kerry would have his face in his phone and text people during my shifts.  He seriously texted more than a 14 year old girl who just came home from a school dance and had to tell her friends what happened.  But it wasn't until I asked him how he got to where he is now that I finally understood what I have heard about all along from any casting director, coach, or my parents...  It's about relationships, establishing them, and then nurturing them all of your life.

There's that cliche, "This guy knows everybody."  They were talking about Kerry.  Working at Simon LA, I not only waited on these people, but also was introduced to them through Kerry.  The ones that stick out the most to me are, Bon Jovi, Shannon Tweed, and Bill Murray.  Kerry and Bill grew up together and are still friends.  Good guy.  With this crowd, Kerry rocks out with his spatula out.

I remember one night, Fred Durst from "Limp Bizkit" was at the restaurant.  Kerry went over to talk to him for awhile.  Before he left the table, I heard Kerry say to Fred, "Can I get your number again?  I lost it with my old phone."

Fred gave him his number, and Kerry came back to the expo line.  I went up to Kerry and asked, "How long have you known him."

"I don't.  That was my first time talking to him.  But now I can keep in contact with him.  That's how I've met a lot of my friends," he simply said.

"I've been doing it wrong all these years," I said, dumbfounded.  But it works!

I know this post has a different tone than my usual bitterness.  I am writing this because I recently discovered that Kerry has announced that he has a rare form of Parkinson's disease, (multiple system atrophy,) and is now getting around in a wheel chair.  He has no family history of Parkinson's.  He has deteriorated physically, but not spiritually.  Kerry always exercised a lot, ate well, and never smoked or drank.  He drank fresh vegetable juice everyday.  (In fact, he had one of the cooks make his juice no matter how busy we were, but that's Kerry.)

I can relate to Kerry.  There's no history of diabetes in my family, but somehow I'm diabetic.  This is one of life's many curveballs.  But he has asked to bring awareness to this disease and cause, and I wanted to do that.

To say that Kerry Simon is courageous and inspiring is a given.  I would rather say that he is strong, because strength is what he needs to continue to move forward.

You can read about Kerry's story here.