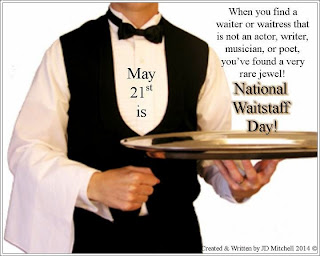 Yesterday was National Waitstaff Day.  A day of remembrance, and sovereignty.  Where people were asked to, "be nice to your waiters and bartenders, and tip them 20 percent.  Much like Mother's Day, and Father's Day, we now need another "special day" to remind people to be nice to people who serve their food and drinks.  This world is ridiculous.  I would rather customers just be nice, and if they don't, then just be the assholes that they always are, and then we servers just talk about them in the side-station.

Here's an example of how customers can get into our heads and make us feel like we are idiots:

The other night, a man and a woman were sitting in my section.  Right away, this sounds like how all of my stories start.  The man starts questioning me about the food.

"The Branzino and the Salmon are both delicious," I answered.

"No.  It's seared and served with a fava puree, wheat berries, and greens.  The fish is lightly seasoned with salt and pepper, and tastes great without a sauce," I told him.

"They don't put anything on it?  Are you sure?  Do you know the menu?  You're not selling me on the Salmon," he said.

"We don't put sauces on the fish.  But I'll go ask the Chef to double check that I know what I'm talking about.  I have to help out four other tables right now.  I'll be back."

"Yeah, see if somebody knows if there's a sauce," he begged.