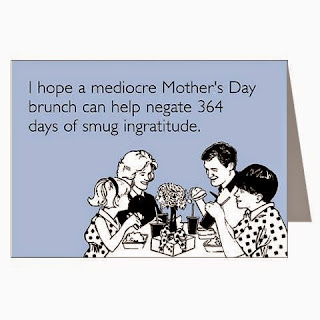 Yes, the service industry survived another Mother's Day.  That is such a weird way to start my conversation with you.  It's like surviving a World War, but putting yourself voluntarily through it EVERY year.

I actually didn't have to work during the "brunch" this year.  Instead of working brunch, I was able to ACTUALLY brunch with my mom and family.  But for some reason, the dinner reservations at my work were just as busy as the brunch reservations.

First of all, Mother's Day is supposed to be a day to celebrate your mom, the woman who birthed you, and who suffered raising you in this crappy world.  I just think it's (almost) funny that we want to add to the suffering of motherhood by bringing your mom to brunch in a busier than normal restaurant.  With food that is pricier than normal.  With servers who are stressed out more than normal.

It's too crowded; it's too expensive, and there are too many moms.

Here are two of my favorite things that happened during my shift last night:

1. The busboy brought bread to a table that was occupied by an older woman (late 40's) and a younger woman (late 20's.)  When he greeted the table he said, "Happy Mother's Day."

Immediately, the younger woman replied, "She's not my mom.  We're girlfriends."  And then they made out.

Lesson learned for the busboy... Never judge a book by it's lesbian cover.

Lesson learned for me... Brunch is fun.  Working brunch sucks.

Longwell Kort said…
We came here for some food and beer. We got the salmon tartar at San Francisco restaurants which was delicious. They also gave us a piece of whiskey cake for free! I highly recommend this place if you get a chance to eat here.
May 26, 2015 at 1:40 AM