LA Times Doesn't Want You to TIP Your Server! 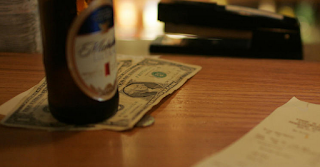 The minimum wage is Los Angeles is supposed to be raised to 15 dollars by the year 2020.  LA follows other cities like Chicago and Seattle by making the minimum wage more tolerable to the increasing costs of living.

This could be fantastic news to those of us who work in the service industry.  That would mean that many of us WOULD actually be getting money on our paychecks.  If you still live under a naive rock, servers don't get money on the paychecks because all of it is taken out for taxes because the wage is so low.  And even lower in places on the East coast like New York and Pennsylvania.

Case in point, an article written by a man who doesn't work in the service industry.  Perhaps at one time, he did--when he still had a soul.  But for sake of this post, he no longer works in the service industry because his taxes state that he is a columnist for the LA Times.  And I always thoroughly enjoy somebody who doesn't work in my business who thinks they know what the hell they're talking about.

David Lazarus wrote this article (LINK) about how archaic the whole process of tipping has become, and in fact, we are the last of the countries to still practice the tipping standard.  Claiming that although Europe started the tipping practice, they no longer uses it as their service industry people somehow have magically become wealthy, earning a higher than average salary, while still putting up with customers.  But they still hold the title for being some of the worst tippers of all time.

If the acronym is true or not, T.I.P.S. is To Insure Proper Service.

We are there for you to have a great time, where you don't have to do anything but eat, drink, and be whatever.  But, by not tipping, restaurant owners are going to have to sacrifice what customers are accustomed to getting:  Free refills on sodas, ice-t, and coffees.  Big portions.  And being able to order off of the menu.

Menu prices were dramatically increase, meaning that people won't go out as much, and the places that you once liked to eat at, will no longer be there.

The only saving grace for the cheapos is that there will still be restaurant deals on Groupon, Living Social, and the "I Hate Spending Money in Restaurants but Still Expect Great Service" sites.