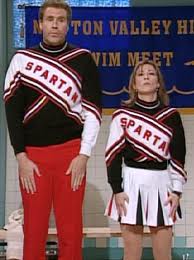 I rode the bench a lot while on the basketball team in high school.  That gave me a lot of time to get to know my friend Craig, develop a bitterness which was the genesis for what fuels me now, and also to learn every single cheer the cheerleaders did.  (What the hell did you expect me to say?  I didn't play unless we were up or down by 20 points with a minute left in the game, so I'm glad I used the time to my advantage.)

So what the hell does this have to do with the service industry?  EVERYTHING!  First off, what sparked this post was an inspirational speech given by one of my general managers during a pre-shift.  To remind you guys who don't know, pre-shift is when all front of house staff gets together before the reservations stroll in, and we discuss what we need to know for the night and such.  It was here when our general manager went off on this tirade about what was wrong with our staff.  The place I work at is owned by a corporation who owns other restaurants around town.  It basically came down to this,

"Across the street at our sister restaurant, the servers may not have the technical skills that you guys have as servers, but they have more regulars and make better money, because they have better personalities," he stated.

Saying a server has no personality is like saying Hitler had poor leadership skills.  (Too soon?)  You don't even have to like your server, but they are going to get you what you want in the end.

They has never been a time when I haven't "cheered" some customer to have a great experience, or had them shaking my hand claiming they would be back.  And that goes for most of my co-workers as well.  (Those co-workers whom this doesn't apply to shall remain nameless, but we all know who I am talking about!)

But that's what we do.  From the moment we greet you when you get to the table, to guiding you through the menu, to thanking you when you leave--we are there, cheering you on to have a good time.