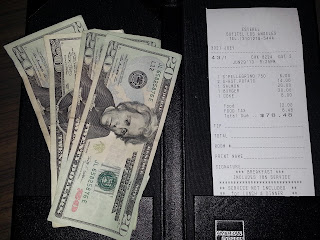 I've posted quite a bit about getting poor tips from many different customers, both foreign and domestic. Yes, it's frustrating and irritating when this happens. I think my frustration is split evenly between people still not knowing how to tip properly, (mostly overseas customers,) and the fact that I still depend upon people's generosity to provide for my family and pay my bills.

However, not all tips are bad. Through my tirades and bitching, I have made a difference in the way some people tip. For example, my parents consistently tip 20 percent. Although it's mostly because their son works in the industry, but nonetheless, it's 20 percent.

And then there's the power of the Internet. I have come across many stories of a "random" person who left some outrageous tip for some unsuspecting server or bartender.  Take the story below for instance.  Thanks to my friend Joan, who posted this on my Facebook, I was able to learn how a man's dying wish was to leave random people a very generous gratuity.  See below:

It was that man's dying wish to be generous and leave an awesome gratuity!  I've had customers wish I was dead, but never were dying to leave me anything like that.  Almost restores my faith in humanity... almost.

Here's another great story about a server who works at a Steak N' Shake.  That place might sound familiar to those of you who listen to my podcast.  It was Beth Haggerty's first job in the service industry.  You can check out Beth's episode HERE.  And below is the story about the generous tip at the Steak N' Shake.

These phantom tippers seem to appear out of nowhere.  I like how the manager actually complimented his server.  And rightfully so!  Makes me believe that lightning can strike the same place twice.  First strike was the tip, the second strike was the compliment from the manager.  Most things I hear from management are:  1. Get off your phone.  2. Upsell. And 3. Get your shift covered.

So these things do happen.  Not often, but they do happen.  Hell, I get excited when I get an 8 percent tip from Mr. Walsh.  He's a regular at one of my places who's notorious for poor tipping and complaining about not getting enough stuff for free.  But stranger things have happened.

The new podcast is up.  Please go to iTunes and rate and review the show.