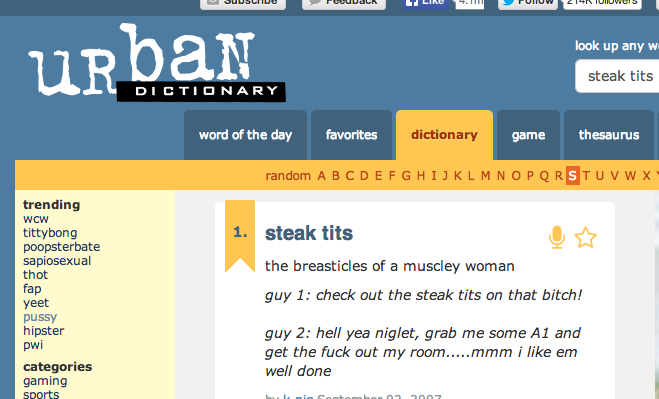 The heat wave has made the freaks come out.  And as my luck would have it, they all sat in my section.  To say the least, my shift the other night was anything BUT dull.  I have previously stated in posts that all a customer has to do is complain about anything and they'll get something for free.  I stand corrected.

It seemed as if a giant trailer from a trailer park had pulled up in front of my restaurant and let out a bunch of people.  The people that sat in my section were a box-wine-drinking, demanding, and tube-top wearing bunch of hillbillies.

One woman sat herself at a table.  She responded to my "Hello, how are you tonight?" with,

"I want bread and butter."

I told her I would take her order first, and then bring some bread.

"How much is your cheeseburger?"

I showed her how big they are and she shook her head and said, "I'll have bread and butter."

"Why don't you decide what you're going to order first?" I said.

"How much are your pizzas?"

"I'll get you the menu."  I went and got her a menu, pointed to the pizzas, and recommended which one she should get.  "This is our cheese pizza.  And it's only $15.00, so it's less than the burger.  You should get that."

She did.  And she asked for bread and butter.  I put in her order, then noticed that the table next to her, a group of five trailer park people, had invited her over to sit with them.  It was like the two trailer parks had merged into a double stack trailer park home.

She got her pizza.  I check on her, she gobbled the entire thing up.  Then the table ordered another pizza.  The woman ate most of that one too.  And then the woman, wearing her tube-top-dumpy-dress says to me,

This is the same lady who didn't get the cheeseburger because it cost too much.  So I replied, "The steak is $40.00.  Do you still want one?"

She did.  She got her steak and devoured that too.  It was an impressive display of eating at it's best.  Then I decided that I couldn't take it anymore, so I brought the table their checks.  One check for the five original diners (2 glasses of wine, and an app,) and one for the single lady (2 pizzas and a steak.)  The original five gave me cash for their small bill and I left to get them change.  When I came back, the single trailer park woman was standing at the expo line, with all of her cash laid out on the counter.

"Do you need me to get you some change," I asked.

"Actually I'm only going to pay for the steak because the pizzas were REALLY bad.  They tasted watery."

"Well that's interesting," I said, "because when I checked on you and asked how the pizzas were, you said with your mouth full that they were good.  So I'm going to need money for the steak AND the pizzas.  And I think the watery taste was because you were drinking water while eating the pizzas."

At this moment, my manager had walked up to help me.

Looking worried, the woman asked me how much money she had on the counter.  I counted it for her.

"How short am I?" she asked.  Obviously eating took precedence over mathematics in her culture.

Then she did something very... interesting?  She put her hands down the front of her tube top and started rubbing her nipples under the top.  Almost as if she was trying to use some sort of boob power to distract me and my (female) manager from her lack of funds.  My manager had no part of it, and I actually felt sick because her breasts were not as impressive as her eating abilities.

"I don't have enough money," she groaned.

My manager stepped in.  "Well, maybe you could ask your friends for some money, or we're going to have to call LAPD, because that would be stealing."

She continued to grope herself and slowly walked off saying she would try to find her friend.  We followed her throughout the restaurant, lounge, and lobby until she finally found her friend.  She managed to come up with twenty more dollars, and after an hour and a half of this, we decided to just eat the last five dollars.  And of course, no tip!

When I finally got back to the restaurant, a woman from the other table had been waiting for her change.  I told her what had happened.

Lesson learned.  Not all trailer park people know each other, and you can't pay for steak with titties.