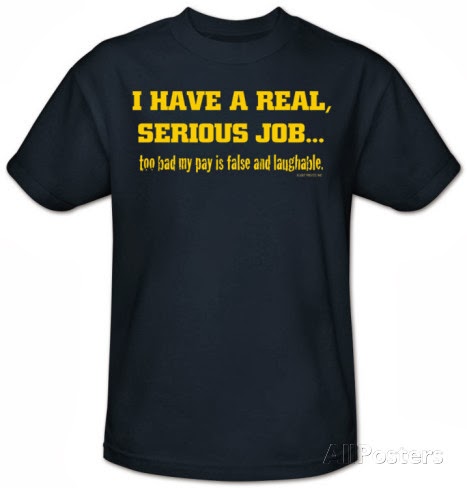 I have recently come across a lot of backlash concerning the custom of tipping and whether or not working in the service industry is a "real job" or not.  After dealing with all the various customers throughout my years in this service industry vortex, I can assure everyone that this job is VERY real.

I posted an article written by Matt Walsh for "The Huffington Post" where he addresses a server's plea about bad tippers on my Facebook Page to show how some people's attitudes about tipping (or not tipping) coincide with the remark, "Get a real job!"  Read the comments after the article.

Enough already!  Who the hell is to say one job is "realer" than another?  One girl (Jade L.) was dumb enough to say that waiting tables is not a "life" job, it's a "student" job.  Granted, I am tired of working in this industry and would rather be running my own TV show, and doing stand-up in the off-season--a la Louis C.K.--but in the meantime, this IS my life.  And people who work as servers or bartenders while getting their undergraduate degree aren't working to make a living.  Some, yes.  But most are not.  They are working for free booze, booze money, and if any tip money is left over they'll spend it on hookers.  Just kidding!  They'll spend it on books about booze.

My east coast counterpart, The Bitchy Waiter, recently wrote about somebody commenting on his post and saying that if we are all so unhappy with our unfair wages, federal average is $7.30, that we should get "real jobs," and stop whining.

So to all those ignorant people out there who think that what I do is so fake and unworthy, let me tell you what I have done through my fake jobs...


Tipping started centuries ago.  If you really have a problem with it, get in your time machine, go back to the English pub that started it, and stay there!

This all sounds pretty real to me.