Woman's Day Magazine Says You Too Can Be Cheap! 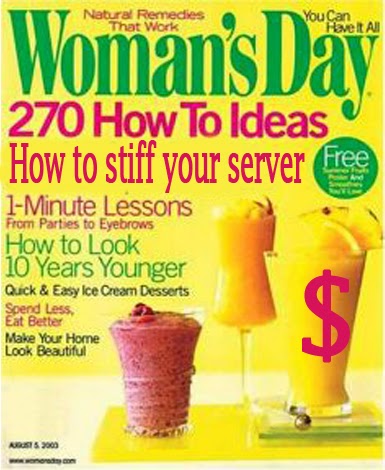 As much as I love to hate working in the service industry, I am drawn to it's idiosyncrasies, much like the Millennium Falcon to the Death Star.  My blogging friend, Bitchy Waiter, has again opened my eyes to someone trying to pull one over on us servers, and make it seem like it's okay.

So one of their illustrious writers, Sabah Karimi, wrote an article recently about, Money Saving Ideas for Dining Out, in order to show her readers how they can save a buck when going out to restaurants.  The article could have been a lot shorter if Sabah had any brains and wrote, If you are struggling with money right now, don't go out to eat!  But alas, Sabah's quest for literary recognition blinded her to these facts and had her write her 7 ways to save at restaurants.

I won't go through all 7, but to sum it up, Sabah claims you can just order an appetizer, or get an entree but take half of it home.  But my favorite being that you don't have to tip the server too much, because according to Sabah, "don't feel pressured to leave a 20 percent tip at all costs; if you didn't receive exceptional service or were disappointed with your dining experience, plan on tipping between 10 to 15 percent.  Over-tipping can quickly make a dent in your dining expenses, so think about how much you're paying the server."

This article just sets people up to have a bad time when they go out!  And 10 to 15 percent?  Did we suddenly travel back to 1986?  Where's my DeLorean?  Who the hell over-tips?  Nobody leaves a restaurant thinking, "It was great, but I think I gave that server too much.  Now I don't have gas money."

The whole reason for dining out is to relax and have a great time.  Putting a limit on what you should spend at a restaurant is like saying that you want to pay less at a movie theater so you can just watch half of the movie.  Go home weirdos!

Also, a restaurant is a place of business.  So Sabah is saying that just because you're struggling, now the restaurant has to struggle with you?  And why is the gratuity the one thing that people see as the place to save a buck?  If you do the math, an 18% tip is not going to break your bank after you've already gone out to spend money.

The gratuity is how us "servers" support ourselves and our families.  And like many of the comments have pointed out, the majority of the people working in the service industry are women.  So a female writer, who writes for a woman's periodical, says it's okay to stiff one of your own.  Way to support your own cause Woman's Day.  Sabah is probably like the lame people who write reviews on Yelp.  Her expertise stems from, "Well, I spend money.  So I know how you can save it."

Sabah, your name rhymes with Jabba, but I would rather have him in my section than you.  At least I know he'll order multiple courses.  And yes, I used two Star Wars references in one post.  You're welcome, Ken Napzok.

Bitter. Party of 1 said…
Hi. Thanks for commenting. Wish u weren't selling something instead of just commenting because you like my blog. Thanks for nothing.
February 1, 2015 at 3:42 AM