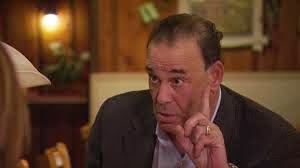 This past new year's eve was one of the busiest that I have ever worked in my service industry life.  I was behind the bar and it was insanity.  At the end, I was exhaustedly-happy, but for most of the night I was elbows deep in the ice and wait times for drinks was reaching 30 minutes.

To let everybody know, I don't have a rhyme or reason how I go from customer to customer while bartending.  It's really about who gets my attention first, and me remembering whom I think is next.  To all of the people who thought I was rude and was making you wait on purpose, well, I did.  Some of you were jerks and have serious drug and alcohol problems.  To the few who were actually nice and actually wished me a happy new year, (only four people did,) I'm sorry you waited.  When it's that busy none of Jon Taffer's rules apply.  But I did think of them.

Speaking of Taffer, when it finally slowed down, there was one guy at my bar who wanted me to do the "generous tip" pour.  I played dumb.

"What would Jon Taffer say?" I asked.

"I'm really glad you just said that," the guy smirked, and then he handed me his business card.  He is one of the heads of Spike TV.  "I buy all the shows for Spike."

"Now I know where to pitch my sitcoms."

"Were not buying scripted television right now," he conceded.

Trumped by reality television.  And he really wanted me to pour extra alcohol in his drink.  Some people think they're above Taffer law.

Nobody seemed to want to rescue me at this bar.  Later, at 2 am, a different guy came up to my bar and tried to get a drink.

"Can I get a glass of champagne," he stumbled.

"Not even just a little bit.  So I can toast the new year?"

"Remember that countdown thing everybody did two hours ago?  That was your chance to toast the new year."

He left.  Pissed off into the new year.