October 06, 2013
I swear by everything holy that the following is the truth.  This story is from when I managed a beer and wine bar called, Cafe Muse. I know that I'm probably going to take some heat from people thinking that I'm being mean, or not compassionate, and to those people I say, "get bent!"  I say it now and I will say it again, I WAS THE VICTIM! 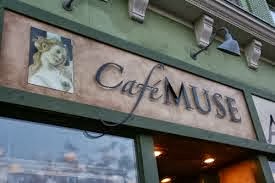 It was at Cafe Muse that I had my very first stalker.  It was too hard to pronounce her Persian name, so everybody told me to call her Donna.  Donna was a very nice woman who had a mental handicap.  Now, I’m probably am going to offend some of you with this, but just so you can get a clear picture of what I was dealing with during these shifts, she had a very hard time talking, and back in the day before it got confusing with all this political correctness, she would have been called retarded.

Donna came in one afternoon and ate with one of her relatives.  I don’t have a problem with anybody with any kind of condition.  As I have one myself, I was very patient with her while she was ordering and such.  But like I said, she had a hard time pronouncing words, so I gave her the time that she needed.

Apparently, I must make a really damn good latte because Donna kept showing up at the beginning of my shifts and ask for one.  I just made them for her and sent her on her way.  Soon enough, I was catching wind from the guys who worked in the kitchen that something else was up.

“She likes you,” the cook Jose de Luis told me that afternoon.

“No, she likes lattes,” I defended.

“I’m telling you.  She did this before with the white boy who was here before you.  She likes white guys.  That guy had to quit.”

“Great!  I’m going to be stalked by a mentally handicapped person,” I joked.
So I went upstairs to talk to my boss about this and he confirmed what I was told.  Alan, my boss, went and got his brother-in-law and they both met with me in his office.  It was like some kind of weird, Persian sit down.

“From now on, don’t say hello, or anything.  Just make her latte and walk away,” they told me.

“So you want me to be mean to your relative?” I said.

“Just don’t say anything, and she won’t bother you.”

So I did what they told me.  Donna would come in the restaurant, I wouldn’t say anything, make her latte, and walked to the back.  The only kicker was that once I got to the back of the restaurant, all the cooks were peering through the window, pointing at me, driving me fucking nuts.  Which is what most restaurant cooks like to do.  Make inappropriate comments, and take their time making the food.

Oddly enough, it worked.  Donna stopped coming by, the tension eased up, and it got back to normal… so I thought.  After about a month, Donna shows up.  I make her drink, but instead of taking it to go, she decides to sit at the bar and drink it.  I can only stand in the back of the restaurant for so long re-folding napkins, and acting like I’ve got stuff to do.  She waves me over, and I’ve got to be honest, I was curious to hear what she had to say.

She hands me a folded piece of paper and leaves.  Most of the time, when a guy is handed a folded up piece of paper from a girl, he is excited about it.  I was frozen with fear.  I could already hear the guys in the back of the restaurant laughing at me.  I opened up the paper to see what looked like a phone number, with the following note:

I have basically been propositioned by a woman, in her mid-forties, who is mentally challenged.  In hindsight, I really wish that I had kept the piece of paper.  And before I go on, let me remind you guys again, I AM THE VICTIM here!  Who the hell is going to believe me on this?  But I took the paper to my boss and the rest of the Persian mafia.  They finally admitted that she had done this to the guy who had the job before me.
“Do I need to get my attorney involved?” I asked.  I always liked to throw that line out.

“No.  Donna will not bother you anymore.  And if she comes in again, just ignore her and don’t make her drink,” they told me.

So the same happened as before.  Donna disappeared for awhile.  Which seemed strange because it seemed like she had some kind of full time job in the offices, but I couldn’t tell you what the hell she did.  But somehow, it was a position that didn’t require her to be around for some of the time.  She must have had some clause in her contract that gives her time off when she's stalking her new favorite white boy.

But like the saying goes, all good things come to an end.  Because Donna reappeared.  It was as if she thought that nobody would notice if she went back to her old habits.  So there she was, at the end of the bar, with the same black mug that she brought in everytime to get her damn latte.

But I knew where this would lead.  As nice of a person as I am, I had to put my head down, grab some random papers off the bar, and walk towards the back.  She had seen me do this before, but never without making her latte.  You could hear the pain coursing through her body.  She called my name again… nothing.

As I stood in the back I could see her turn and walk towards the front door, but before she got outside, she turned back to me while standing in the doorway.  She must have channeled her inner Glenn Close from “Fatal Attraction,” because in one quick motion, she raised her mug up above her head and slammed it down on the ground.

Broken mug pieces shattered everywhere as she turned a hobbled off to wait for her ride.  I never saw Donna again.  It’s safe to say that if it were up to her, she probably would have killed me if she possessed the capabilities, so that nobody else could have me.  But let this be a lesson:  Never manage a place owned by Persians.  And don't date anyone you work with.  Although I never dated Donna, I still look back on her as my so called (mentally-challenged) Persian girlfriend.