Tips for the Lips 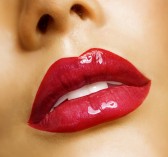 The New York Post published a story about female servers in France who made better tips by wearing red lipstick.  See below.

RENNES, France -- Waitresses may strive to get orders correct and provide excellent service -- but pocketing good tips is all about the lips, French research has revealed.

Waitresses who wear red lipstick on average received tips 50 percent of the time from male customers, The (London) Times reported, citing a study by sociologists at the Universite de Bretagne-Sud.

The tips were larger in amount than those given to waitresses who wore brown, pink or no lipstick -- and those groups on average were only tipped 30 percent of the time.
The presence of red lipstick made no impact on the tipping habits of female customers.
The researchers noted that the rise in tips by male customers could be due to red lips being "associated with an indication of estrogen levels, sexual arousal and health."

The study results had "practical implications for female employees," the sociologists said, suggesting that red lipstick was a means for "enhancing their incomes, especially in bars or restaurants where men go."

The sociologists compiled their research after recording the tips received by seven waitresses -- wearing various colors of lipstick or none at all -- who served close to 450 customers over a two-month period.

The study was published in the International Journal of Hospitality Management.

Squidge said…
The French don't tip. When you explain to a French person that American waiters don't get paid minimum wage, but are expected to reach it thanks to tips, they don't understand. "See the '15% service included' that are printed on all French menus? Americans don't have that. That's why the food over there is so cheap!" 90% of the time their answer to that statement will be "What?! But that's illegal!" What, paying people less than minimum wage? Not in America it's not.
July 6, 2012 at 8:55 AM