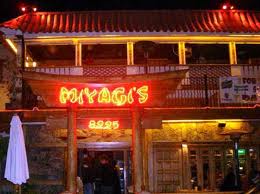 People who work in the "service industry" are extremely expendable.  Owners and managers like to show how powerful and mighty they can be by placing you on suspensions, and the ultimate, letting you go.  And in a world where you are living by the money you make shift by shift, this can hurt not only your wallet, but your pride as well.

There was one establishment in particular that reveled in treating their employees like cattle, slaughtering them at their leisure, and threatening to do the same to anybody else who didn't fall in line.  I know many of you who live in Los Angeles probably have worked at this restaurant, or one of the sister restaurants at one point in your service career, the dreaded... Miyagi's on Sunset.

One of the owners set the tone the first staff meeting that I attended.  I was hired as a bartender, and was actually pretty excited to be working at such a busy and trendy night spot in Hollywood at the time.  Tom, the owner, simply stated at the meeting, "These are the way things work around here.  I don't care if you like it or not.  If you don't, you can walk out the door right now!"  Alec Baldwin in "Glengarry Glen Ross" showed more compassion.

I was stuck working the 2nd floor bar.  The place was 3 stories with a bar on each one.  The busiest bars were on 1 and 3.  I was the newbie, and got the crap bar.  But they thought that they would be nice to me and throw me a bone by putting me on the 3rd floor on the weekends to work the service bar that was set up next to the dance floor.  This meant that the servers would come to me for cocktails that they couldn't get from the main service bar because that bar was too busy serving customers.  Needless to say, I hardly made any drinks, and barely made 35 dollars working a shift that I didn't leave until 2:30 in the morning.  I finally got fed up and decided to exercise my entrepreneurial skills, by making 4 or 5 Long Island Ice Teas, putting them on a tray, stepping out from my partitioned bar, and selling the drinks for 5 bucks a pop.  Larceny, allegedly.  But I got bills, people!

I was involved in a theater company in Hollywood this time as well.  I had finally gotten a part in one of the mainstage shows, and had requested the appropriate time off from Miyagi's, getting it approved, so I thought I was okay.  Wrong!  As I was walking up to the theater company on opening night, I get a phone call.  It's Heather, my manager at Miyagi's.

"Hi Joey.  It's Heather from Miyagi's.  I was wondering if you were planning on coming into work tonight?"

"I requested the time off and got it approved, by you, so I wouldn't have to come in this weekend."  I stated.

"Well, we are going to be really busy.  And one of the other bartenders called off, so I need you to come in."  She said, with her best manager voice as possible.

"I'm in a show.  I can't come in.  That's why I requested the time off."  I was beyond frustrated at this point.

"Well, since you aren't coming in, we're going to have to let you go."  Heather said, without even missing a beat.  Pretty obvious that she had said this speech before.

"Just so I'm clear, you're letting me go for following procedure for getting time off?"

"If you aren't coming into work, then yes."

I hung up.  This was my first time getting fired from a service job, and I'm proud to say, that it wasn't the last.

Anonymous said…
I know that place!!! Their used to be a manager named Chris that worked there. He was the biggest douchebag in a city filled with douchebaggery!
May 7, 2012 at 4:21 PM