I Got Yelped in Chinese! 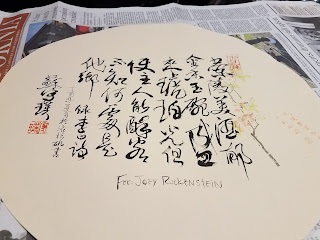 I've made it.  Much like when an actor gets a stalker, or an athlete gets called up from the minor leagues, I have made it!  I got Yelped in Chinese.

I am no stranger to Yelp.  I have been Yelped, been commented about Yelpers, and people have commented about the Yelpers who have Yelped about me.  But now I have been put on blast in Chinese.  Perhaps by some descendant of an ancient Taoist monk, who has been waiting for the opportunity to express their disgust with their experience in black ink, wooden block, and parchment paper.

Let's be honest, when someone takes the time to leave you a scroll in Chinese characters, you know it's got to be something serious.  And since I am a serious person, I took the time to have it authenticated and translated.  It's legit.  (Thanks Google Translate.)  Here you go.

"To all of my Yelp family.  I have NEVER had an experience like this before.  But first, let me say this... I'M NEVER COMING BACK!!!

I came here for a friend's bday dinner and was told that we would have a table on the patio.  So many of you, my brethren, have raved about this patio.  So I figured, why the f not?!?  My friend simply adores patios.  She has added two additional patios to her house so now she has three.  She knows patios.  #patioaficionado.  Well, as it turns out, what the f was I thinking?!?  #wtfwit.

When we arrived, we were told by the extremely rude hostess that we couldn't sit on the patio.  EVEN THOUGH WE HAD A RESERVATION!!!  She told us that they had a private function or something.  HELLO?  Aren't reservations considered a function?!?  Trying to make the best of the situation, I saw a table inside by the window and asked if we could sit there.  Miss Wannabe ANTM just shrugs and begrudgingly walks us to the table.  #sorrytomakeuwork

WHATEVER!  I just thought to myself.  Again, I am a cauldron of positivity, but I could feel myself starting to boil over.  After we were sat some busser brought us some bread and just dumped it on the table.  He mumbled something about the bread and quickly left.  The birthday girl and I attempted to eat what they called bread but I sensed that something was off.  It felt warm, but I knew better.  I pulled my travel-sized food pocket thermometer out of my Louis Vuitton and inserted it into the bread.  I KNEW IT!!!  30 degrees Celcius.  That's barely 5 degrees above room temp.  I was so hungry at this point that I suffered through it.  UHG!  SO DRY!

Our server finally arrived and took our drink order and told us the specials.  I gave him the universal hand sign and eye signal to let him know that it was my friend's birthday.  It was actually a reminder since I made a notation on our reservation.  Our server is probably some wannabe actor, but he could hardly remember the specials and he wasn't even excited about them.

He disappears after we give him our order.  TICK TICK TICK.  Our drinks haven't arrived.  Finally, after what seemed like 30 minutes he returns with our drinks saying something about needing to blah blah blah--GIVE ME MY ALCOHOL ALREADY!  Like I said, it's my friend's bday and I'm treating her because I am amazing!  We CHEERS to eachother as our apps arrive, then the nightmare continues...

Our cocktails have like no alcohol.  I mean, like none.  I couldn't taste it and my friend said hers just tasted like juice.  WTF?!?  We ordered the Steak Tartar and Caesar Salad.  The tartar was raw and the Caesar tasted fishy.  WTF AGAIN?!?  This was not the special bday dinner that I was hoping to have.  I am looking like such a f@#king idiot for choosing this place!

Our server trolls by to see how we are doing.  I wave him away.  Stop bothering us already!  He is soooooo needy.  Servers (aka servants) should only appear when summoned.  A few snaps of my fingers usually works.  They are like the cops, never around when you need them, and when everything is fine, they appear out of nowhere for no reason other than to "act" like they're working.  AS IF!!!

Just like our drinks, which were empty FOREVER BTW..., our entrees took FOREVER to arrive!  And BTW again... there was only, like, 3 other tables in the place.  Seriously the place was DESSERTED!  EMPTY EMPTY EMPTY!!!

The flatbread, salmon, and Brussel Sprouts arrive.  By this time we were so starving that we just immediately began eating.  And another BTW... I totally deserved these carbs.  I did, like, Soul Cycle 3x this week.  But I totally noticed that the flatbread was "flat" on flavor.  UHG!  How hard is it to cook a flatbread?  I ordered the salmon medium plus with a hint of well done, but totally came out medium.  Thank you handy pocket thermometer--again!  The Brussel Sprouts were green, which the servant never said anything about.  Again... how F@#kIng hard???????

I couldn't take it anymore!  I ordered the server to wrap up our bday ice cream to go but he just brought us a brown box.  "What's this?!?" I questioned.  "Your ice cream," he said with total attitude.  Again, communication much?

We hardly saw the server at all.  I did see him going in and out of some door with a window on it.  Probably a drug addict.  Ew!  He touched our plates!!!