Waiter? My Teeth Are in the Bread 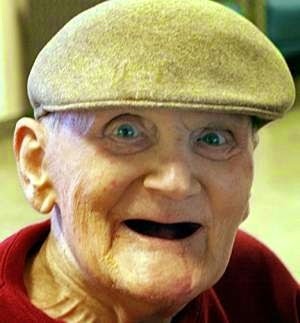 When things get awkward between a server and the guest, they get REALLY awkward.  Sometimes the problem can be solved with some sort of diplomacy, and other times the server can only walk away and blog about it the next day.

Last night was the latter.

I had an older gentleman and his daughter sitting in my section.  I wasn't sure if she was his daughter or not--but it didn't gross me out as much to think of her as his daughter--so I just went with that.

After they had ordered, I brought them the bread.  It's a mix of baguettes, crackers, and stuff.  Next thing I know, the daughter is waving me over.

"Is everything okay?" I ask.

"Not really."  She motions to the gentleman.  "He bit into the baguette and broke his front teeth off."

Sure enough, the man showed me where his front teeth used to be, and they weren't there.  But the whole time I'm thinking of what to say in this moment.  I've handled a lot of situations, but never something like this.  I was assuming that these were fake teeth that broke off and not his real ones.

"Of course it hurt," the woman responded.

What I didn't get was, why the hell would somebody who has fixed-fake-front-teeth, bite into a baguette?  The baguettes are the hardest of the breads that I offered.  And now the woman was worried about the rest of their meal that wasn't yet at the table.  I just apologized to them, and walked away.

I told my supervisor, and the chef, and we didn't know what to do.  We got an incident report filled out just in case they would want to get some sort of compensation for the teeth.

The food arrived at the table, and the woman was worried about how her dad was going to eat the Chicken Caesar Salad, and Margarita Pizza.  He was just interested in eating, but she had to keep telling him that he had no front teeth.

He found a way to do it, because the food disappeared.  Hey, if worse came to worse, I would have offered to puree the salad and pizza.  That's how you know I'm a professional, I'm willing to go above and beyond for my customers.

But now I am going to start carrying a tube of "Fixadent" in my apron for the next time this happens.