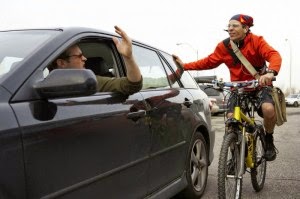 I drive through Beverly Hills when I go to work.  Besides the usual annoying things like Bentleys, Porsches, and Maseratis; me having to ignore all of the texting and driving--because apparently if you have money, you're exempt from this law.  That leaves me with the bicyclists, and they are the worst of the bunch.  They are the worst because they think that they're cars too.

Since when does a bike outweigh a car?  I got A's in Chemistry so I'm going to confidently say that a car outweighs a bike.  Even if the person riding the bike is morbidly obese, my car still outweighs the bicycle package.  But bicyclists still act like they are a semi-truck driver, barreling down the road, on the way to make a delivery to the supermarket, while peeing in a wide-mouth-jug.

My last encounter involved a guy riding his bike right in the middle of the road.  Just to give you a visual, there are two lanes going in each direction.  But those two lanes are packed with cars desperately trying to cut each other off, in order to save 15 seconds so when they arrive at their destination they can give a shorter apology for being late.

This guy doesn't move left, and he doesn't move right.  He stayed smack in the middle, and ignored any sign that there was a car behind him.  That car was me.

I give the "Hello?" horn honk as a courtesy.  He turns around and courteously gives me the finger.  I can't go around him because I've got an older woman driving a Cadillac to my right, and she is drifting around her lane like a boat that didn't get tied down in the marina.

Our conversation went as follows:

And I pulled away.  Because another thing a car can do better than a bike, is go faster.