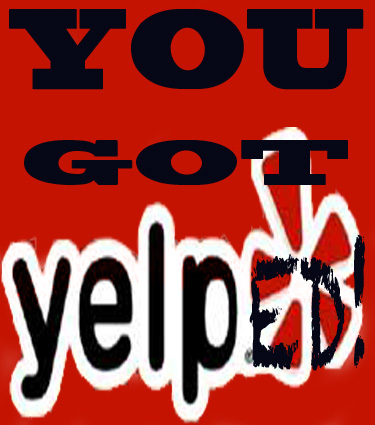 Meet M S from Los Angeles, CA.  A woman, who in typical Yelper-cowardly fashion, has hidden her face in her profile pic because she doesn't want the world to know what she looks like when she writes pointless reviews on Yelp.

What makes this review even more repulsive than most is the fact that she blames the restaurant for her allergy.  Another person who failed to disclose important information that could've possibly killed her, and now it's the restaurant's fault.

I have an allergy to poor grammar.  M S must have been taught by Yoda.  "Taste the brussel sprouts had."

The owner wrote a very apologetic message to me and invited me to come back and give them another chance as they wanted to make it right. Though I honestly appreciate the gesture, my allergic experience was so bad it was enough to scare me away as I cannot potentially put my health at risk again by eating their food. I did recover but it took many days of antihistamine pills, and walking around with huge well which I still have scars from more than a month later. I've eaten she'll fish since then and everything has been all good.

What a crackwhore!  So it's possible that she didn't know she was allergic to crab, but the fact that the owner stepped up to remedy the situation and she blames them is beyond me.  And if she had been "walking around with huge well" for a month, she wouldn't had scars, she would've had a bad back.  I'm glad she has recovered, but eating "she'll fish" wasn't the problem.  The problem was Blue Crab.

Thanks for your sincere apology and attention TLT, GREAT customer service which is why I'll give you 2 stars but I can't bring myself to return for the food.

I think TLT is getting the better end of this deal.  You don't need weirdos like her.  BUT, here's where I give TLT credit, they responded to M S on Yelp.  If you don't know, owners can reply to Yelpers to try to make the situation right.  Check out what the GM, Zach W., wrote:

Dear MS,
Thank you for your feedback. I am happy to hear that you have recovered from your allergic attack. Food allergies are a scary and could be a life threatening issue to deal with. The same day you ate here, we served several dozen Blue Crab Grilled Cheese Sandwiches and unfortunately, you were the only customer with any allergic or negative reactions. We have contacted Sysco Foods, the distributor of the product, and they received no similar cases or reports at the time. It is frightening when our bodies let us down, but publicly blaming the food or restaurant because you had an allergic reaction isn't right. If you need to blame us to feel better, go ahead. We're just happy you're back to feeling better. We have maintained an A rating since we've opened and constantly put a ton of attention and detail to proper health and safety practices. We strive to deliver a 5 star experience and it is important to know of any food allergies prior to dining so we can better serve you.
Best Regards,
Zach W.
GM, TLT Food

BRAVO ZACH!  BRAV-FRICKIN-O!  "...publicly blaming the food or restaurant because you had an allergic reaction isn't right."  You hear that M S?  It sucks that you had a reaction, but you should be thanking them either way.  Either you discovered that you have an allergy to Blue Crab, or you were too dumb to let them know that you're allergic to Blue Crab.

I figured out what M S stands for... Majorly Stupid!

Anonymous said…
I hate Yelp. Any jerk can go on and slam a business with no accountability and based on nothing more than their opinion. Also Yelp sucks because they try to extort business' to pay them otherwise Yelp will put their negative ratings first and bury any positive reviews. The worst expression ever coined is "The customer is always right". It has just bred a society of spoiled, entitled, lacking in manners and common courtesy assholes.
July 23, 2015 at 7:13 AM