The Fate of a Yelper 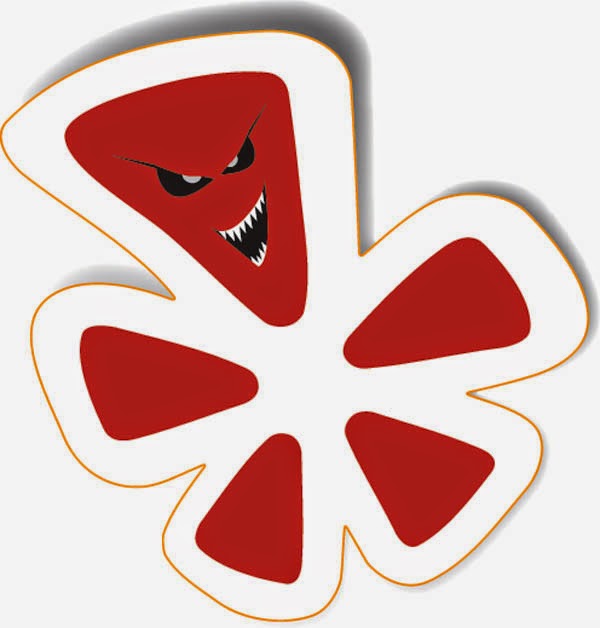 I have been cyber threatened!  Weapons and insults are a thing of the past.  Customers nowadays prefer to be cowards and use their Yelp profiles to get what they want in restaurants.  To quote "Cassius" from Julius Caesar:


Cassius:
Why, man, he [Caesar] doth bestride the narrow world
Like a colossus, and we petty men
Walk under his huge legs, and peep about
To find ourselves dishonorable graves.
Men at some time are masters of their fates;
The fault, dear Brutus, is not in our stars,
But in ourselves, that we are underlings.


Accept your own fate, Yelpers.  I can no longer be slain with your petty words.  In fact, your words fuel my blogs and podcasts.  Just like this man and woman I had sitting in my section the other night.

Just to let anybody know, if I greet the table and you start out our conversation by saying, "We are going to start out with the Tuna Carpaccio, and then decide on everything else," I am going to put in the order of Tuna Carpaccio.

After a couple of minutes, I went back to the couple, and the guy says to me,

"What's the 'From-Age' board?"  Remember where the accent is put on fromage.  But I don't like to make people feel dumb by correcting them right away.

"That's our cheese board selection.  You pick any 3 cheeses, and it's served with jam, honey, nuts, and toast points."  But seriously, "From-Age?"

"We are trying to decide on this and what to have for entrees."

So I helped them decide what cheeses to get, and then I explained the specials to them.  The woman got the "Striped Bass" special, and the man got the pasta.  Before I left the table, the Tuna Carpaccio arrived, but the couple seemed confused.  I asked them if everything was okay, and they said they thought it would be more like a tartar.  I said I could take it away and get them a tartar, but they said no.

NEWS FLASH:  If it was going to be Tuna Tartar, it would say that on the menu.  Carpaccio is not tartar!

Then the woman wanted wine.  She said she was deciding between the Merlot and Cab.  I told her I'd bring them a taste of both.  She went with the Merlot.  I told her I would be right back with 2 glasses of Merlot.

Their cheese arrived, they ate it.  Then their entrees arrived.  I checked on them again and the woman explained to me that she had ordered a bottle of wine, not 2 glasses.  I apologized, got them a bottle, and thought I had fixed the situation.  Then the woman calls me over with a question:

"What's this red stuff with the fish?" she asked.

She said okay.  I ended up boxing up the remainder of her meal--minus the chorizo.

They skipped dessert, asked for the check, and paid the check.  Then the man goes to the restroom and the woman calls me back over.  Now it gets fun!

"I just wanted to let you know that I was not happy with the way the meal went.  For the prices we paid, too many things went wrong.  We never said we wanted the Tuna Carpaccio, but it came anyways.  I CLEARLY asked for a bottle of wine, and I don't eat meat or pork, but there was pork in my entree." she exclaimed.

"I'm sorry things weren't to your liking," I started.  "But the guy said that you two wanted to start out with the Tuna and then decide on everything else.  I apologize for my mix-up with the wine, but I got you the bottle right away.  But as far as you not eating meat or pork... why is this the first time I'm hearing about this?  I would have directed you to get a different entree, not the special the says it has Chorizo for one of the sides."  Maybe I was a bit too direct, but nothing was wrong during the meal, only after the meal.  Plus, she had me wrap up the rest of her entree togo.  I was confused to say the least.  But I told her I would get my manager to see if we could do something for her.

I explained to my manager everything that had happened.  Then he went to the couple to hear their side of the story.  While he was there, the couple bickered back and forth about him wanting her to say something during the meal, and her not wanting to say something.  Then the woman tells my manager, "I could go on Yelp and write a bad review!"

That's all that needs to be said about these idiots.  They are people that just want to get something for free.  And if you don't eat meat or pork, SAY SOMETHING WHEN I'M TAKING YOUR ORDER!!!  And it's pronounced (fromage) NOT (from-age) you wack job!

So what's their fate?  Probably a life a bickering and uncertainty.  But at least they have Yelp to comfort them.