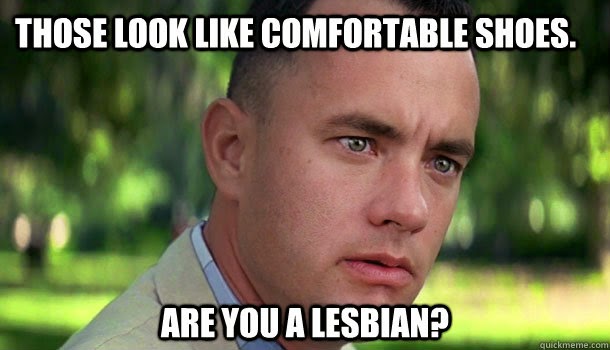 This is the year of the con artist.  I cannot tell you how many times I have had people come into my restaurant, drink and eat, and then claim they don't have any money on them to pay.  What year is this?

The latest person to attempt this heist is definitely my favorite to date.  She's a short, butch, acerbic-Lesbian, who wore "Tom Cruise" Ray Bans, and a black ball cap that was tilted to the side.  And didn't have a problem telling me she's a Lesbian, or whatever else was on her mind.  Now before any Lesbians take offense to me using the L-word, I'm just trying to paint the picture.  I have members of my family and friends who are Lesbians, and I have no problem saying that they can throw a football farther than me, and also take me to the hoop.  (SIGH.)

She sat on the patio and started out by having a couple of glasses of wine, saying that she was going to be meeting with somebody in a couple of hours.  Her friend arrives, (a woman,) and she decides to switch to a bottle of wine for the two of them.  They order food, order another bottle, and another one, and now it's almost 11 at night.  Did I mention that the Lesbian started at 4 in the afternoon?

I must admit that I was amused with her banter about how she wanted to get away from West Hollywood, because it was too gay for her--is that like a synagogue being too Jewish?--but I wanted to get the hell out of there because she was my last table.

I drop her almost $400.00 check, and did my fake walk-away/ walk-back, make my surprised "you haven't put out a form of payment" look.  She tells me she's working on it and I get my supervisor involved.  He tries to get her to pay only to have her reveal that...

SHE DOESN'T HAVE ANY MONEY!

Then she tells us that although she doesn't have any cash or a credit card, she has a credit card number for us to use.  I tell her that doesn't work for us, so she tries to barter her Macbook Pro for the bill.  At this point, her friend looks nervous and weirded out.  We tell her that she needs to come up with the money ASAP.  She says she'll contact some friends.

At this point, her friend starts walking through the lounge and the restaurant telling me that she's "looking for somebody."  Is that somebody named "ATM" by any chance?

I decide to keep an eye on the Lesbian Tom Cruise to make sure she doesn't make a run for it.  From afar, I see her drunkenly scope out her situation, get up and stumble towards the door into the lounge.  Before she can open the door, she drops her bag and her Macbook Pro comes crashing to the ground.  So much for the barter!  She quickly composes herself, and then slowly makes her way to the side door to the street.  I follow her.

The next thing I saw made me wish that I had filmed this entire night.  As Lesbian Tom Cruise made her way down to the sidewalk, she starts doing this weird-short-Lesbian type run.  Imagine Forrest Gump, but as a troll with sunglasses, carrying an oversized bag on her shoulder, trying to run for the first time but without learning how to walk first.

Surprisingly, she stops.  "I am, but I've been waiting for that guy for over an hour."

"That manager guy.  I've been trying to pay."

"You can still pay, if you want.  It's just easier to pay if you're still on property."

You walks back to the front of the building, and I guide her to a place where she can sit down and still be watched.

"Where is that guy?  I've been trying to pay for over an hour!" she demands.

"He will be back.  Sometimes time seems to stand still when you're drunk," I tell her.  She didn't get it.

Finally my supervisor returns, along with security, and I was relieved of my Lesbian detail.  Cops were called, and they even gave her a chance to pay the bill.  She offered her credit card number to them, and they accepted it.  Only not for the bill, but for a trip to jail.  Her friend was only guilty by association and was let go.  I was let with no tip.