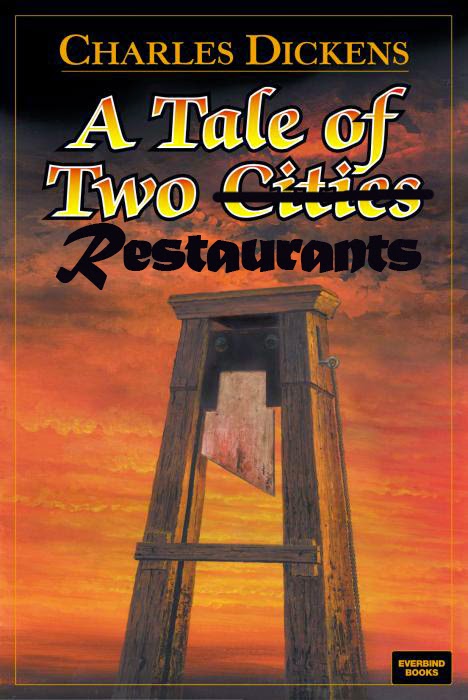 When Charles Dickens wrote, "It was the best of times, it was the worst of times," he must have worked in a restaurant that used to be booming, but had come crashing to a halt.  Time cannot be crueler, than time standing still in an empty restaurant.

I've noticed that restaurants have busy and slow seasons.  Yes, there are some restaurants that are busy 365 days a year.  Spago in Beverly Hills is one of those places.  But for the rest of us peons who couldn't get hired at one of the cash-cows, we work at places that suffer from great highs, and extreme lows.  When it gets close to tax time, my restaurant is slow.  When the holidays roll around, business picks up with parties and bosses acting like they care by paying for the company to have a 3-course meal.

Right now I am in the midst of the slow season.  School just started.  Families are adjusting to their fall schedules.  Whatever!  This in turn has given me ample time to reflect on my life and how long I have been in the service industry.  It has not been positive reflection.  I have told you guys many times that I have worked in this industry for 15 years.  To say that I have made my way around the Los Angeles restaurant scene is an understatement.  I have been fired from hotels and restaurants like a high class call girl working the Polo Lounge, but I didn't make as much money.  But I do have pimps, they're just called managers.

When I have a customer, they have my attention, I give great service, and they leave happy.  But then the "empty restaurant syndrome" begins like a clock ticking until the next reservation, or walk-in comes into the restaurant.  As much as I want some customers to hurry up and leave, I feel the same way about wanting them to come in.

Comedian Bret Ernst has a great joke about waiting tables.  He hated waiting for customers to show up, and when they did, he'd shout, "WHY DO THEY HAVE TO EAT HERE?"  Ah, so true.

What's even better is when, on a slow night, I approach some guests and the first thing they say to me is, "when does it get busy here?"  Now I need to be able to make people magically appear out-of-nowhere.  I'll just add ILLUSIONIST to my abilities as a server.

The worst thing about having EMPTY RESTAURANT SYNDROME is having to spend extra time with a manager.  No server wants to do that.