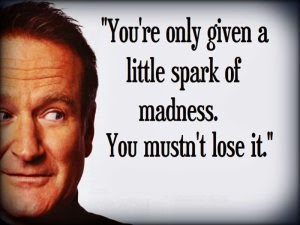 I always thought Robin Williams was an amazing talent.  "Mrs. Doubtfire" and "Dead Poet's Society"  are two of my favorite films. As an improver, I admired how quick he was to pull from his bag of tricks to justify anything that was going on in that moment.
There was, however, a bad stigma with him and stand-up comics because he had a reputation of being a joke thief.  Joke stealing happens more often than not, (unfortunately,) but when you have a celebrity status--like Robin--the label became somewhat legendary.

BUT, they do say that imitation is the sincerest form of flattery.

Pope Benedict won the crown of Big Popa April 19th, 2005.  Cardinal Francis Arinze was a forerunner to take the crown before losing to Benedict.  Cardinal Francis is from Nigeria.  After Last Pope Standing had concluded, I started doing a joke about what it would be like to have a Black Pope:  POPE DADDY!  I did the joke for the first time at The Hollywood Improv.

About two years later, I was doing a show at Room 5 in Hollywood.  While I was unnervingly watching the host do way too much time in-between comics, he started on a premise about having a Black Pope.  It's not a crime to have your own take on a premise, but when I noticed that his pacing, punchlines, and act out to conclude the joke were the same as mine... I decided to have a little talk with him.

I mentioned that I have a very similar joke and that if we are ever on the same show again, he shouldn't be doing it.  The host tells me that people steal good jokes all of the time.  He then defends himself by saying that he saw Robin Williams doing the same joke, and that's where he got it.

Entertain the angels Robin Williams.  Thanks for the flattery.