Are You Smarter Than A Customer? 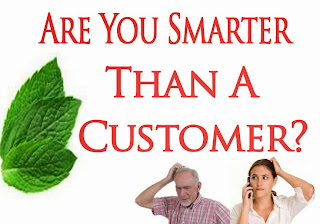 If my life were a game show, then I would be constantly playing against my customers.  So let's get ready to play, "Are You Smarter Than A Customer?"

Recently I argued against one lady who spoke annoyingly slow.  When she finally finished her question, it was along the lines of, "Is there caffeine in the herbal mint tea?"

"No.  There's no caffeine in the mint tea," I answered.

"I'll have the decaf mint tea," she replied.  Mind you, she spoke extremely slow.

"There is no decaf mint tea.  It's herbal.  There's no caffeine in mint leaves."  I argued.  But I wish there was caffeine.  So she could speed herself along and get the hell out of my section.

Then, on the same night, the bar was busy so I went behind it to help out the other bartender, Matt.  There were only two bartenders behind the bar.  Matt was on one side of the horseshoe and I was on the other.  A group of girls comes up to my side and one of them says,

"There's no alcohol in my drink.  Can you put some more in it?  It just tastes like fruit juice."

This is when I love being behind the bar, because I can actually talk to customers the way I want to.

"If there's no alcohol in it, then how can I add more to it?"

"Well it just tastes like juice.  There's not enough alcohol," she pleaded.

"You have to take your drink to the person who made it."  I added.

"It was one of the bartenders back there."

"Well there's only two of us, so it shouldn't be hard to find the one who made your drink."  And then I helped the person next to her.