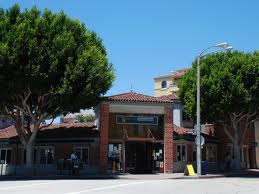 Throughout my 12 years of performing comedy in Los Angeles, I have seen many shows come and go that have been crucial to comedians throughout their careers.  Drew Carey's Thursday nights at The Hollywood Improv, Dublin's on Sunset on Tuesday's with Jay Davis and Dane Cook.  But to me, it was The Westwood Brew near UCLA that has allowed me to grow as a comedian at shows upstairs in an attic on Mondays, Thursdays, and Saturday nights.  And this past weekend, those shows have sadly ended.

Before you say "what the hell does this have to do with working in the service industry?," let me stop you and tell you this bar was a home away from home for me and a lot of other comics.  In a way, we worked for The Brew Co.  Not a paid position, but nonetheless, we provided a service for them in exchange for having a place to workout our material and grow as comics.  But after the abuse we have taken all of these years, we probably should have been paid. 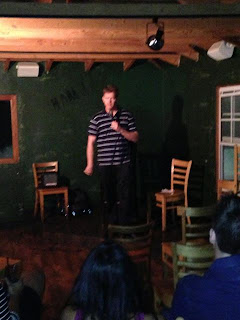 I moved to Los Angeles in the summer of 1999.  I had wanted to do stand-up for awhile.  Finally in the fall, I had decided to make my move.  My roommate at the time, Ryan Flynn, was a stand-up, and I had badgered him to death with questions about how to do it.  He finally just told me that I had to get up onstage and all of my questions would be answered.  He was some sort of stand-up Yoda.  "Laugh they will, yes."  I had somehow found out that their was a bar close to my apartment in Westwood that had a comedy night.  It was The Westwood Brew Co.  The Brew Co has three rooms.  A main bar downstairs with two rooms upstairs on the patios.  The comedy room was in the smaller of the two upstairs.

It was on a Tuesday night, and the show was run by a lady named Kathy "the meat curtain" Kinneky.  I went to the show and talked to her afterwards.  She told me it was a booked show, but she would be willing to give me some stage time if I could get some friends to come out and support the room.  A typical deal for most bookers here in LA, but I was green so I immediately said, "no problem," and got booked for the next week.  The week blew by and my friends and some of their friends all came out to the show.  I was actually really impressed with how many people came out to see me do stand-up for the first time.  Kathy hosted the show and introduced me as "the guy you would want to invite to a keg party because he would bring all of the good looking people."  I did my set.  For a first time, it wasn't great, but it wasn't horrible.  I remember people laughing and I also remember seeing some of my friends look more nervous watching me do stand-up than I was actually doing stand-up.  But that was all it took.  I was quickly addicted to stand-up comedy and have been doing it ever since around town, across the country, and even in Canada, but I always continued to come back to my roots at The Westwood Brew Co.

Now, let me be honest with you.  The shows at The Brew Co were more frustrating than gratifying.  I now understand what a girl feels like when they like a guy for a long time, and then that guy just ignores them.  It makes the girl just like the guy more.  That was what it was like most of the time performing at The Brew Co. 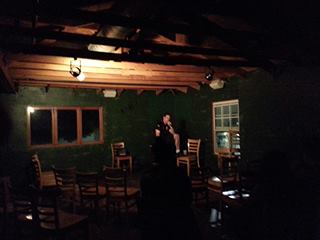 I have killed, bombed, waited, ditched, got frustrated, and been congratulated during my 12 years at The Brew Co.  I have witnessed audience-on-audience, audience-on-comic, and comic-on-comic violence break out during many of the shows.  I have done shows for 2 to 60 people, walked audiences, brought audiences in, and seen and heard the door to the room being slammed over 8000 times.  Because of all of this we coined the term "bullet-proof" for the comics who have performed there because we had seen and performed for every single kind of circumstance imaginable.  I mean, how many comedy shows can you go to where a buddy of yours (Brian Swinehart) tells an audience member, "have a drink on me," and then watch him  pour his blue drink over the head of some frat guy.  All I can say is "B-SWINE!"  (Priceless!)

Thank you Kathy, Adam, Jay, Tarun, Mike T, Amir, Jason, and Mike M. for all of the late night spots you have given me.  I have complained in previous blogs about how difficult it is for me to pursue stand-up while waiting tables at night, but these guys always accommodated my schedule and let me show up five minutes before many of the shows were about to end, and they had wanted to go home. 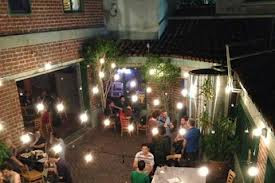 Thank you Brew Co bartenders.  In the early years:  Mark and some other peeps I can't remember their names.  And the bartenders now:  George, Paul, and Megan.

Saying "good-bye" kind of feels like high school graduation.  I feel like I'll never see some of these comics again.  I hope that's not true, but just in case.  "K.I.T."  and "HAVE A GREAT SUMMER!"

But mostly, thank-you to The Westwood Brew Co.  You provided me and my fellow comics a place to continue to come back to and never asked for anything in return.  We laughed, we yelled, glassware was broken, microphones went out and we did some shows without them.  But all-in-all, it was comedy at The Brew Co.

If it is in my destiny to be on "Inside the Actors Studio" with James Lipton, I would hope that he would turn over one of his blue cards and say to me, "tell me about The Westwood Brew Co."

I will forever be grateful.