Gateway to the Service Industry 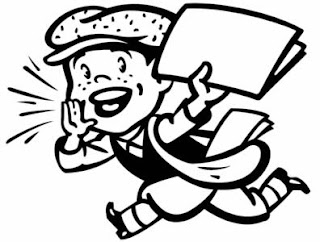 I have written quite a bit about my battles with customers, tipping, and the way people behave in restaurants.  I have put up with a lot, (and to be honest,) some customers have put up with a lot from me.  What I haven't talked about yet is how I was introduced to the wacky world called the "Service Industry."  The high of getting my first gratuity, and the low of getting stiffed.  How I learned to give good service, and how I learned to get back at customers who didn't tip me.  This, my friends, is an origin story.  So, to be cliche, it started when I was eleven years old...

I wanted to have a way to make extra money.  The extra chores that I could do around the house didn't excite me.  Mainly because the only choice I had was to pull weeds from the front hillside.

And after quickly learning that I was running out of tricks to fool my parents that the weeding had actually been accomplished; i.e. complaining that they were violating child labor laws... getting my friends to help me out... burying the weeds with the dirt from the hillside; I looked elsewhere for monetary satisfaction.

My friend Jason who lived across the street was looking to give up his paper route with "The Camarillo Star Free Press."

"You just roll up the papers.  Put them in the bag, put the bag on your bike, and simply throw the papers onto your customer's porches."  He skillfully persuaded me.  "And at the end of the month, you collect the money your customers owe for their subscription, and then they tip you."

My blue eyes stayed wide with anticipation.  "What's a tip?"

"That's money they give you for doing a good job.  It's like your paycheck for delivering the papers."

I was in.  And the best part, it was an afternoon paper.  It had to be delivered by 5pm.  But the weekends it was by 8am.  So my would-be boss Christine came to my house to meet me and have my mom sign something.  I remember her being weird and ditzy.  We all sat down in our living room.  She explained the job.  I agreed.  My mom signed the form.  Then it got weird when Christine tried to touch the family Bible that was on the coffee table.  The hairs on the back of my neck rose as my mom thwarted Christine's attempt by simply saying, "Don't Touch That!"  (The Irish have a way with words.)  Christine quickly left, and I was hired.

Then I started to learn about what customer service was all about.  Some of my customers wanted their paper before a certain time.  Others wanted it with a double rubber band, and a rain bag.  (Even if it wasn't raining!)  And the hardest of all, some wanted their paper placed perfectly in a designated spot.  Right in front of their door.  The middle of the driveway.  Not on the lawn, but on the stone step in front of the lawn.  In the mailbox.  And... in front of their gate because they have two little dogs who will eat the paper if I throw it over the gate.

At first, the placement of the paper was nearly impossible.  I'm riding a BMX bike, one-gear, up multiple hills, with a thirty pound bag of newspapers sometimes hanging from my handle-bars and other times wearing it over my head, all while trying to gracefully hurl a rolled up paper 18 feet to hit it's mark.  I received many complaints.  Phone calls to my house.  Etc.  But I managed to get the hang of it, and my route times were becoming quicker and quicker.  I was proud of the work that I was doing, and pleased that I was giving my customers what they waned.  Until I went collecting.

"Collecting" is a term for paperboys which means going to your customer's houses at the end of the month to get the money that they owe you for their newspaper subscriptions.  This is when they would also tip me.  What I really learned here was that customers expect you to do everything for them, and if you don't, they punish you with excuses, canceled subscriptions, and bad tips.

"Can I pay you tomorrow?  I don't have my check book with me."  One customer pleaded.  First of all, I had to ride my bike their house to get the money that they owed me.  So now I have to make an extra trip all the way to their house when I have other important eleven year old things to do.  And second, who the hell doesn't have their check book with them?!  Do you have a second home that you house your check books at?

"They old paperboy got my paper where I wanted it every time.  I would gave him five dollars.  You should try to be more like him."  As they handed me a whole dollar.
"The only times I missed your porch was when it was pouring rain.  I kept crashing on my bike to get up your driveway."  I politely defended myself.
"I'm sure I could just ask for a different person to deliver my paper.  And I'd like fifty cents back from that dollar."

Some customers flat out didn't tip me.  At first, I didn't understand why.  I put the paper in front of their gate like they instructed.  Their dogs didn't get the paper.  I had done no wrong.  But they never tipped me.  Until I figured something out... retaliation.  My customers that tipped, got their paper the way they wanted it.  On time.  "X" marks the spot.  Those that didn't tip, found their newspaper torn to shreds by their two little white dogs that somehow found the paper on the wrong side of the gate.

The dog customer eventually got the message.  Other customers stayed loyal, while others canceled their subscriptions and went with the "LA Times."  The paper route helped shape the person that I am today.  Hard-working, diligent, and professional.  But the thing that truly has stayed with me to this day is that being given a gratuity is a compliment.  But when I don't receive compliments, I am a bitter person.

Paula R said…
Great post. I remember those days of the paper route. If someone didnt tip that would be it. People need to know that you cant mess with my brother.....
November 15, 2011 at 4:13 PM

Unknown said…
An The blog was absolutely fantastic! Lot of great information which can be helpful in some or the other way. Keep updating the blog, looking forward for more contents...Great job, keep it up.
Mcx Commodity Trading Tips
August 21, 2014 at 2:55 AM