Customers Are Not Right, Marshall Field 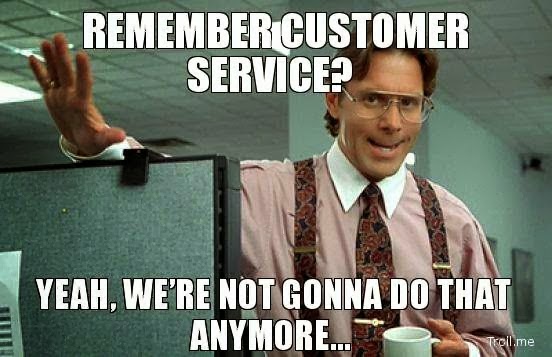 When the phrase, "The customer is always right," was uttered by Marshall Field back in 1904 he wanted to give the customer the ultimate service experience, but unfortunately, he didn't get to experience the magnitude of customers that we have today.  In fact, if he were alive today, he probably would have said, "The customer is out of their  F@#King mind."

I haven't had any difficult customers in a while, so the universe decided to bestow them upon me the other night.  A man and a woman, dressed like they came out of a Calvin and Hobbes cartoon strip, were seated in my section, waiting to be served.

"What's good here?" they asked.  No initial response to me asking them how they're going, mind you.

I took them on a tour through our menu and pointed out some things that I actually enjoyed.  Why the hell do people ask that question?  What's good?  The chairs.  They have great back support.

Then came the questions.  Not just the normal one or two, but asking me about every item and ingredient.  I'm all for educating my fellow man/ woman, but some people need to embrace Google a bit more.

"We are going to share the NY Steak," the man ordered for him and his woman friend.  I actually didn't know if they were "together," but now in the aftermath of it all, I hope that they are.  They deserve to be together for the holidays.  Probably by themselves, complaining about me.

"How would you like the steak cooked?" I asked.

"I like mine medium, but he likes his medium-rare," the woman blurted out.

"How about somewhere in-between?"

"Why don't you have the kitchen cook one half medium-rare and the other medium?  And I want to order a cocktail."

"--they did it for us the last time," she interrupted.

I could feel my eyes in the back of my head.  "What kind of cocktail would you like?"

"I can't decide.  Surprise me," she ordered.

I saw this as my opportunity to leave, so I did.  I got my supervisor involved and he diplomatically got the kitchen to be able to accommodate their dumb steak request.  I brought the woman one of our new fantastic cocktails that I chose for her.  I explained to them that all of their requests could be accommodated and they seemed... (Ahem)... pleased.

This is the one problem with this time of year.  The week before a big holiday, restaurants are usually really slow.  In the case of my restaurant, it's painfully slow.  Like having your gums scraped.  (Mr. Mom, anyone?)  So we have to please a customer like this because if we didn't, there wouldn't be anybody else in the restaurant to serve.  I see the woman waving me over so I go check on them.

I knew that she was wrong about the drink, but I just went to get the Ice-T, and tell my supervisor.  Their dinner comes out and they get to it.  I check on them and they tell me that one half of the steak is cooked correctly and the other is overcooked.  This is EXACTLY what I knew would happen.  If any of you reading this post works in a restaurant, listen to me and don't underestimate the power of "NO."  I should have confidently said "no" at the beginning.

We cook another steak, and now the man says it's undercooked.  Sorry, actually he said it was, "RAW."

We cook another one, bring it out, same response.  We compared the steaks that he sent back and they all were cooked correctly.  Apparently this man is the Goldilocks of steaks.  "Too rare.  Not rare enough.  Wrong shade of red."

Surprisingly enough, the man and woman actually ate the last steak we brought to them.  But not without saying that they didn't like the mac n' cheese, because... "It's gross."  No lady, you're gross!