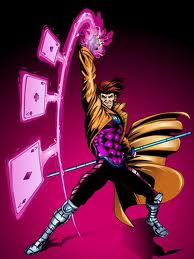 I always love the part in any mob movie when the head guy is out to eat or having drinks with his crew, and he reaches into his pocket and pulls out a wad of cash, counts the bills towards him from the roll, and then tosses it towards the server like a drop in the bucket.  Nobody in his crew had any doubt about who was paying bill, nor would they try to embarrass themselves or the boss by trying to pay the tab themselves.

Then why do so many people insist on fighting over the check when I bring it to the table?  It's always the same thing.

"Don't let anybody else at the table pay the bill but me!"

"Give me the check!  Nobody else!"

Either that or it's a fencing dual with credit cards when I bring the check to the table.  With couples arguing about who is hosting whom, with elbows, head-butts, and "Gambit-style" card throwing.  And for what?  To make somebody feel bad for wanting to pay?  I've seen dog fights end with more diplomacy.

Then there's the person who gives me their credit card at the beginning of the meal while they make their way to the bathroom.  Great!  Now I'm busy running around doing my job and now I have to be your wallet!  Does it look like your server has room to be able to hang on to your credit card for two hours while you dine, and not worry about losing it the entire time?

I've actually had customers grab my arm to take their friends credit card away from me just so they can give me their card.  And even after I already ran the card through the computer, I've had people ask me to switch the payment just so they can pay and not their friend.

It's gotten to the point where I just set the check down in the middle of the table, step back and watch as couples tear each others arms off, just so they can be the baller, and pay the check.  Just let that person pay for the check already, they obviously don't mind fighting in public.  My only advice is if those are the people that you find yourself dining with, I suggest dining alone.  Less fighting.