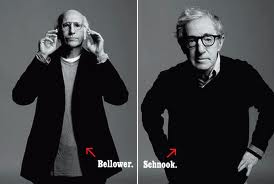 I knew I was going to be in trouble the other night when my co-worker Michael motions to a customer and says to me, "I had that guy last night.  Good luck with him!"

My last table of the night, and I get the wild card.  I decide to do my best impression of "I care about the customers" and quickly greeted the table.  I was immediately blasted with,

"I can't have anything with black pepper, garlic, dairy, or butter.  But I was in here the other night, and the server was able to accommodate me.  I think his name was Michael.  Is he here tonight?  I like him."  I glance over at Michael, and he's enjoying not being in my place.

I go over the menu with the guy and his date, and I quickly recognize the condition he has, it's a neurosis of Woody Allen mixed with Larry David.  He likes pasta without sauce, but then he orders a sauce on the side so he can scoop it in himself.  He likes fish by itself, without sides, but then wants to order some vegetables with it.

"But remember, I can't have pepper, butter, garlic, or dairy," he insists on reminding me.

"I remember sir.  I even wrote it down," I say, just to reassure him.

"Now what kind of vegetables do you have for sides?" he asks.

"We can do asparagus, or spinach," I say.

"We have artichokes, but that was a special that we had last night."

"See if the chef can do that again for me.  Michael did that for me the other night," he insisted.

This is exactly why servers SHOULD NOT accommodate every customers requests.  If it's within reason, fine.  But little things that are annoying, absolutely not!  Because now it's going to be an issue for every server who has this guy.

I go into the kitchen and talk with the chef.  He says he can do a saute of mixed vegetables consisting of cauliflower  broccoli, zucchini, and asparagus.  He sets it up, and I head back to the table with the good news.

"The chef says he can fix you a nice assortment of vegetables that are within your dietary constrictions," I say.

"What vegetables?  Don't assume you know what I like!" Woody/Larry said.  And he was serious!

"What vegetables do you have?" he inquired.

Damn't!  We have already been through this!  But I obliged.  "We have cauliflower..."

"What about broccoli?" trying to fool him.

"Sorry, I forgot.  What about spinach?"

"Then we're out of vegetables," I conceded.  It's fine if you have dietary limits, but don't make it my problem.  I'm Diabetic, but I don't want to put someone else in charge of my well-being.

"Can't you do that artichoke special?  I had it the other night."

"The artichokes are marinated in things you can't have.  Black pepper, butter, garlic, and dairy... remember?"

"But I had that the other night," he gasped.

"Well, then you had things that you should not of had."  I finished.

"I'll just have the fish and pasta."

And that's exactly what I gave him, and that's what he ate.  But to make things even stranger, at the end of the meal, he thanked me profusely for accommodating his requests and that he and his date had a great time.  And he tipped me over twenty percent!  Who the hell knows!