Mr. Smith Goes to France--AND SHOULD STAY THERE!!! 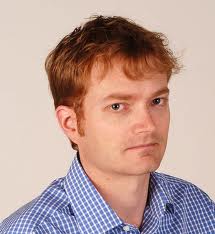 Once again the soldiers of the service industry have been harpooned by an individual, who thinks that people who work in the service industry are those that should be looked down upon, mocked, and degraded all because he believes that karma won't find him and jam a pencil down his urethra and snap it in half.

Kyle Smith (above pic,) a writer for the NY Post and also my doppelganger and archenemy, wrote an article on March 2nd, [You Got Served] explaining his disdain for his server, and how he thinks that all "ex-darlings of their high school theater department," should in so many words, shut their mouths and jump off the Brooklyn bridge.  But don't dare jump until you've brought Kyle another cocktail for Christ's sake!  And all for telling him his name.  Which I am against in the first place.  I've never made more or less in tips by telling or not telling a customer my name.

Obviously the reaction from waiters and bartenders ranges from lynching him, putting Visine in his water, to demanding an apology.  Given that he writes for the NY Post, a would-be incestuous cousin of The National Enquirer, or Star Magazine, the apology won't happen as Kyle has been reveling in the fact that he has received so many hate emails, and accepts them as some sort of victory.  [Hate Emails]  The header on his blog even says, "there's little point in writing if you can't annoy somebody."  Kyle, not only have you annoyed the crap outta me and every other person who works in restaurants around the world, you have guaranteed yourself a lifetime supply of packages from the "Shit Surplus Store," but also your food will never taste quite right from any restaurant you go to from now on.

And of all places to compare service standards, Kyle chooses France.  A place that he frequents a week or two every year.  Where he says that the waiters, "don't work for tips (the customer is expected to leave a mere Euro or two) and yet they are so much less annoying."  Kyle, you dumb-dildo, that's because in France they automatically add 19 percent to every bill!  And they are much less annoying because the service in France is NOT as good as it is here in America!

Kyle also has the audacity to speak for all of America saying that we all have to be nice to servers because they hold everybody hostage with what they are doing to the food behind the scenes.  Actually Kyle, most people are nice because they are just nice people.  Why would I ever want to do something bad to a customer's food if they are nice and courteous?  Like I said before, Kyle doesn't have to worry about faking niceness anymore, his food will forever be glazed with some sort of anus ju.

We could all continue the barrage of emails to Kyle, kyle.smith@nypost.com, but that will do nothing more than give Kyle more satisfaction than he ever deserves.  As a server I want nothing more than for him to sustain permanent, but not life threatening injury from either a passing NY bus, or a trampling from a NY matinee theater crowd rushing to get discounted tickets in Times Square, but there is never a reason to NOT be nice to your server or bartender.  Just as much as you might be annoyed with them at that moment, keep in mind that WE certainly are just as annoyed with you.

I will conclude with one of my favorite emails to Kyle:

YOU were the abortion I was supposed to go through with that summer! I had a hunch you would grow up to be a half-assed sensationalist for the Post, and not a real human being with standards and a sense of decency. F**k. Please tell me more about your trip to France and how much your trout costs.
Love,
Ma
PS Thank you for being the only grown up in NYC who has the guts to tackle high school theater jokes. You make me so proud, little man.