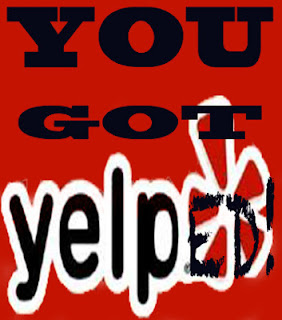 It seems as if some people never learn, and if they did, they would probably find something wrong with what they had learned and then they would "Yelp" about it.

This time around, it's Barry "No, it isn't short for Barack," C. from Los Angeles.  I didn't write that tagline, Barry did.  See for yourself on his Yelp profile, Barry is a Douche.  Like all aliens who write their Doctorate thesis on Yelp, Barry claims to know what it takes to give good service, and that he is the master of his domain.  Maybe in a "Seinfeldian" aspect, but not from a server aspect.

Here's what Barry had to say one evening while dining out at Rock Sugar...

"Took a prospective new customer here for a work dinner with high hopes. Unfortunately, this restaurant falls into the "Jack of All Trades Master of Nothing" bucket." Barry is apparently an expert on people who are masters.  And I'm weary of people who throw around the term, "master."  Usually doesn't work out well for people who do that.
"The joy of going around a city like Los Angeles with its abundant offering of authentic Asian food is the favorable taste to price ratio. You want better Thai food than what they serve at RockSugar? Head to almost any spot in Thai town. Looking for good Indian food? There are various spots in the city that can scratch that itch. Want Chinese food done well? Go to the San Gabriel Valley. Korean? Koreatown."  It seems that Barry is someone who needs to take his own advice, and go else where.  With such an abundant knowledge of Asian cuisine and where to get it, Barry would probably be much more comfortable in one of the shady areas of Los Angeles that he recommended.
"Restaurants like RockSugar exist to serve those diners who don't know any better or those who do and are trying to impress their dates/customers (like me) by spending a lot of money unnecessarily."  But isn't that the goal of any restaurant?  In general, restaurants exist for those people who don't want to eat at home.  HELLO?!!!
"Ironically, the only thing they do well is their non-Pan Asian dish, the Caramelized Banana Custard Cake."  And ironically, Barry and his "customer" finish off their meal with a non-Pan Asian dish.  Meaning that Barry is all over the board with what he wants and desires.

Barry probably is on Meganslaw.com, and should be reported to the authorities for going to a restaurant with a "customer."  He is the perfect example of someone who doesn't follow the basic rules of going out to a restaurant to have a good time.  And the rule is:  HAVE A GOOD TIME.  But with a name like BARRY?...