A Good Attitude on Life 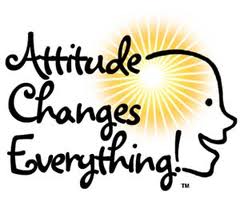 I usually write about the many, many customers who have acted inappropriately and annoyed me throughout the years.  But it would be unfair to not tell the story of a customer who amazed me with the best attitude, when he had a obvious, severe difficulty to overcome.

During one of my shifts, I saw a party of four being sat in a booth.  It was two parents, with their son and daughter.  When they sat down, I noticed something about the son, that he didn't have any arms.  He looked over the menu, ordered what he wanted, and proceeded to have a great time dining out with his family.

Then the food arrived.  And I noticed that nobody helped the son eat, because he was feeding himself without having any arms.  He took his shoes off, and with the most amazing flexibility, brought one of his legs over the table, grabbed a fork with his toes, and fed himself with his legs and feet as if they were arms and hands.  Again, at NO POINT, did anyone help him out, he was smiling, enjoying his food, and enjoying a fantastic dining experience.

And a lady at the table next to his, was complaining to me that she had a white napkin, was wearing black, so she needed a black napkin.