My Vodka's not strong enough! 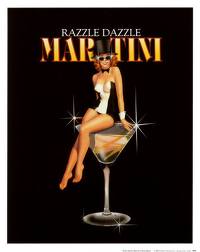 One of the fun things about many restaurants is that not only do they have a creative, seasonal, and fun food menu, many of them also have a drink menu to compliment the food menu. (I'm not talking about the Cheesecake Factory's drink menu! Too many choices. And the poor bartenders who have to learn all of those ridiculous recipes. (One word that you should NEVER associate with bartending is "RECIPES.")

One shift, I had a table of seven people who all ordered drinks.  Everybody ordered some sort of fluffy cocktail, while one girl ordered a Grey Goose Vodka martini. There are three ingredients in this martini: 1. Olives. 2. A glass. And, 3. Vodka. There is very little of the first two, and a lot of number 3. So basically the whole drink is Vodka. Perfect for any lush who thinks that she is still attractive, even though her attractive ship sailed ten years ago. After the first drink, she waves me over... "I love this martini, but I don't feel buzzed, and I would usually would feel a little fuzzy by now. It doesn't take a lot to get me drunk." She raved.

I politely explained, "The only way to make your vodka martini any stronger, would be to use a bigger glass." (And seriously, who doesn't want their drink served in a cauldron?)  She didn't take the hint.

"Well, can you ask the bartender if they could make the martini a bit stronger?  It's the least you could do."

"Of course.  I'll ask him that."  I, actually, was making my own drinks this night.

"I talked to the bartender.  He said he could try to make your vodka martini a bit stronger.  So would you like me to order another one for you?"

"I ALREADY order another one from you.  Get me that drink!"  She barked.  (I say barked because I believe that is her first language.)

"Of course.  It was my miscommunication."  I love this game.  It's the closest thing I can get to punching a customer in the throat.

I go back to the bar, make her martini the exact same way, except... I switched the proportions between vodka and vermouth.  It' the equivalent of putting Visine in someones drink.  Without the side effects of explosive diarrhea.  So now it's a vermouth martini, disguised as a vodka one.

"Here's your stronger "vodka" martini.  Can I get anybody anything else?"  The rest of her friends now finally see the truth about their friend, and apologize and thank me.  Knowing they are going to unfriend his troll after the dinner.