10 Ways To Be A Good Customer 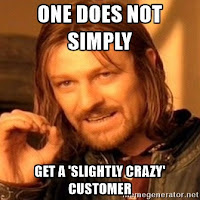 Customers are at it again.  Over the past couple of weeks I've had one fall off his barstool and have an asthmatic attack, another bumped his balls into a pole while leaving the restaurant and said he was going to sue because his balls were bleeding, and another complained that his drink was overpoured the first round so he should get that much every time.

So with the holidays creeping up on us, it's time to roll out a quick list of how to act when dining out.

2.  Get off your phones.
We are too obsessed with staying connected!  Selfies, Insta-stories, pornhub.  How the hell are you supposed to enjoy your whiskey and steak if you're not even acknowledging that it's in front of you as you shovel it into your gullet?  What about the person that is sitting across from you?  And don't be on your phone and try to order from me while you're talking with Satan.  I'll give you your moment, but if it continues, that moment will turn into a long wait because I have other tables that aren't on their phones.  And when you finally get off your phone, keep it off of the table.  Tables are small, plates are big, so leaving it directly in front of you is a good way to have a drink spilled on it or a plate smashing down on your Gorilla glass.

3.  When you say you're ready to order, be READY TO ORDER!
Too many times I've had a table wave me over, say that they're ready to order, and then I proceed to stand there waiting for customers to actually decide what they want to order.  You're not picking a college (Lou Santini.)  It's food.  Also, understand that there is a difference between fish, chicken, and steak.  So when you ask me what's better between the chicken, fish, and steak, the look I give you should let you know that I resent you for taking more oxygen out of this world that could be used for people who use more than 1% of their brain.

4.  No waving, snapping or yelling to get my attention.
I get it, you desperately need attention.  But snapping your fingers at me, or waving at me from across the restaurant will not help you to get my attention.  If you aggressively wave at me from across the restaurant, I'll probably just wave back.  I know you're there!  Right now I wish you weren't and I'm hoping your arm will snap off.  Where's the fire?  Like Ramona said, "CALM DOWN!  Take a Xanex!"  And for fuck's sake DO NOT YELL at me either.  The other night, some old man yelled, "DOES ANYBODY WORK HERE?!?", while I was taking an order at a table next to his.  I replied, "we don't open for another hour."

5.  Show up!
When you make a reservation, we are holding a table for you for that time period, so come claim your precious table.  Nowadays people will make multiple reservations at different restaurants because they can't decide where they want to eat.  Then when they finally do decide, they ghost the other reservations.  This puts us in a bad position to turn other customers away because we are waiting for you to show up.  And if you're going to be late, call.  Think of this as a date with the restaurant.  The good thing for us is that we use apps like Open Table and we keep track and notes about who the ghosts are, and how we are going to bust them.

6.  Do you know who I am?
If you say this to me I am going to treat you like you have Alzheimer's.  The same goes for "I'm friends with the owner."  The second one is a lie because restaurant owners and (chefs) don't have friends.

7.  Listen when I tell you the specials.
The chef has prepared several specials that they want us to memorize and we have to act like it's the greatest thing ever, the least you can do is listen to me when I recite them to the table.  I'm happy to answer questions about the menu and tell you what my favorite items are, but keep in mind that you and I have different tastes.  Just because I like it doesn't mean that you will.  Put on your grown-up panties and decide for yourself.

8.  Allergies Allergies Allergies
Having allergies sucks!  I'm Diabetic and my wife has a peanut allergy.  You can kill us with a Snickers.  Things can be taken out to accommodate your "conditions," but don't make up an entire dish just because you are doing Keto, or Paleo, or What-The-Fuck-Ever-EO.

9.  Only try three wines MAX!
You're not at Yogurtland.  I am not handing out sample cups for you to go down the line of wines that we serve by the glass for you to sample and act like you can tell the difference between them all.  If you want to try the two different Cabs that we have, then, of course, I'll bring you a taste of each.  But for the love of Pete, I'm not bringing you a taste of every varietal simply because you can't make up your fricking mind.  That is a waste of everyone's time and a waste of wine.  Sinner!  Most customers can barely tell the difference between white and red wine, let alone the difference between two different Cabs.  It's all grapes people!

10.  Just the TIP!
Still, one of the biggest problems in the service industry, are the illustrious tips.  I am not saying that servers and bartenders are automatically entitled to 20%.  But what I am saying is that if you got what you wanted, saw me being non-obtrusive during service, made some wine or food suggestions for you, made you a cocktail from scratch based on your preferences, made you laugh and enjoy yourself--then TIP!  You're not saving any money by not tipping the appropriate amount.  You've already spent 100 dollars, another 20 is not going to break your credit.  Tipping is not going away anytime soon, the guy with the bleeding balls will go away, but not the culture of tipping.  Just tip!