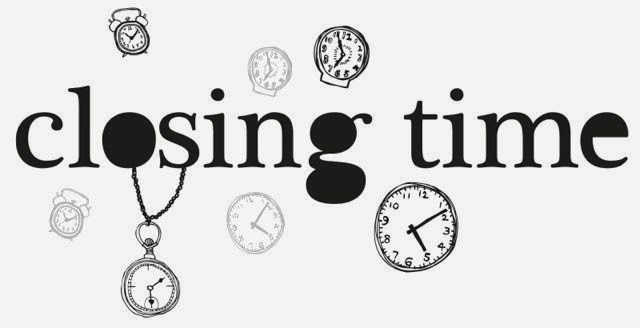 Nobody is in the restaurant.  The tables have been cleared off, or they have been set-up for breakfast/lunch service for the next day.  Even though the clock has not struck "closing time" yet, the fact that there haven't been any tables for almost an hour signals the staff to close.  Then they appear.

The customers who just want a quick bite to eat and then they say they'll leave.  These people make sure to point out that it's still a minute before you close, so they guilt trip their way to a table.  I clear away all of the set-up that I had done and re-set their table for dinner.

"Was it busy tonight?" the girl asks.

"We were earlier.  But then those people left," I reply.  Don't get me wrong:  Yes, I want to have customers, but not when we are about to close.  It's not worth the extra few dollars to stick around for another hour or so.

I explain to them that the kitchen is closing, so they are going to need to decide quickly.  They order some drinks and say they'll be ready by the time I return.

I return.  The man gestures for the girl to order first.  She's still undecided.  (Shocker!)  I can feel the kitchen staff burning holes into my skull with the stares they are giving me to get the order in.  But I get it, they want to go home too.  Finally the man chimes in and orders a steak.  Then I turn my attention back to the woman.

"Nothing really is jumping out at me... do you think they can make me some type of pasta with chicken, vegetables, and some type of sauce?" the woman demands.

"Actually the Penne Pasta on the menu has all of those things," I explain.

I point it out to her.  What is the deal with people having to see exactly where things are on the damn menu?  I'm not making it up.  If I say it's on the menu, then it's on the menu.  Regardless, she orders the pasta after carefully reading it over... a couple of times... out loud.

I finally put their order in, and it's already 20 minutes past the time that they sat down and were told that we are closing.  A restaurant is the ONLY place that things like this happen.  If you're at the bank, and it's closing time, you had better believe that one of the out-of-shape armed guards is going to be bullying you out the door.  Just because your money is there doesn't mean that you own the place.

My manager comes back to check on me and the table.  This is always interesting to me because managers will ALWAYS seat a late table, so we have the business, but then they are the first ones to ask if they're finished yet.  They would've been finished by now if you had NEVER SAT THEM IN THE FIRST PLACE!

The couple finishes their entrees and I use the old "bring them some chocolates on a plate" trick, so they think that this will be their dessert, so they won't stay and order dessert off the menu.  Fortunately, it worked.  I drop their check and was thinking that I was finally finished.  When I go to pick up their payment, I was lectured by the woman that she really didn't like her cocktail--even though she had decided to modify one of the specialty cocktails that we have on the menu.

At this point, it's better to take it off the bill rather than argue that she is an idiot.  They pay.  They leave.  For all of that, I made less than 10 percent.  The closing Gods were unkind to me this night.

When the restaurant is closed, that means that they are closed.  Jack-in-the-box has a 24 hour drive-thru.  Go there, and say hi to Jack for me.