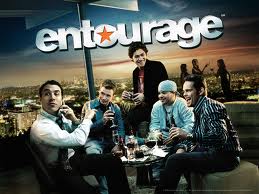 I have waited on all types of celebrities throughout my career in the service industry.  Some of my favorites have been Molly Shannon, Mark Wahlberg, and even Ozzy Osbourne--even though I couldn't understand what the hell he was saying.  Most people of this stature seem to be pretty well behaved.  Their entourage, the freeloading friends that hang out with them, are the ones who seem to cause the most trouble.

Kind of like how Los Angeles gets a bad reputation for being a fake, stuck up city, when it's actually the people who are transplants from other parts of the country that make it this way, the same goes for the so-called friends of celebrities who are giving them a bad name.

I was bartending at The Beverly Hills Hotel.  Mark Wahlberg was shooting the film "Rockstar" at the time.  I went over to see if he needed anything to drink.  He didn't order right away, but instead just started talking to me like I was just another person hanging out at the party he was attending.  Then one of his entourage interrupts our conversation.

"Aren't you here just to take our drink order?" she scoffed.

"Yes.  I was just about to get to that,"  I politely but annoyingly replied.  I hate being interrupted!!!

"Well I want a Cosmo!"  And she boxed me out of the group like Dennis Rodman when he used to take basketball seriously.

So I went and got their drinks, but somehow, I accidentally forget the mean girl's drink.  "We're all out of Cosmos right now," I lied.  "But if you want to wait right here, I'm sure we can find one somewhere."

And actually, I did find her one.  I took another guest's Cosmo when they weren't looking and gave it to that girl.  Hepatitis anyone?