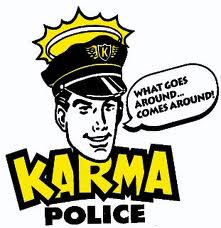 I am an honest person, and I believe that there is some form of karma in the world.  Some people are put here to test you and see how well you can interpret those situations.  After what happened to me one night, it seems that honesty is not always the best way to go about your life.

A gentleman was dining by himself in my section.  After some mild chit chat, I had determined that he spoke the Queens English, and this meant I was going to get a lousy tip.  (Sorry, but British people don't tip.  It's a fact.)  His total bill was 76 dollars.  He placed cash inside, got up and left.  When I went to pick up the check, I counted five 20's.  And on his actual check, he filled in the total with 80 dollars, and wrote in a tip of $4.00.  (I know, horrid.  But focus on what this blog is about.)  I counted five 20's again and determined that he was drunk and accidentally placed one too many 20's in the mix.

I chased him down the hall.  He was staying in the hotel, so he was on the way to the elevator.  I caught up with him.

"I saw that you wrote in 80 dollars for your total, but you accidentally left 100."  I explained.

"On my better days, yes."  I proudly stated.

"You should've just kept the extra 20."  And with that he stashed the 20 into his pocket, and POOF! disappeared into a cloud of black smoke leaving me stunned and upset that I somehow was the person who was wrong.

Lesson learned:  Honesty is not always the best policy to live by.  And Brits have lousy senses of humor and need to finally free Ireland!