STOP! Or I'll steal your tip! 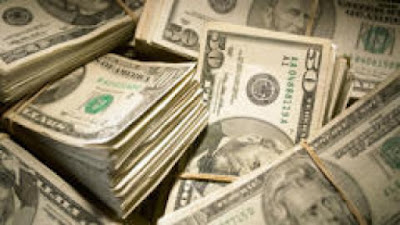 Stacy Knutson, a struggling Minnesota waitress and mother of five, says she was searching for a "miracle" to help her family with financial problems. But that "miracle" quickly came and went after police seized a $12,000 tip that was left at her table. Knutson filed a lawsuit in Clay County District Court stating that the money is rightfully hers. Police argue it is drug money. Knutson was working at the Fryn' Pan in Moorhead, Minn., when, according to her attorney, Craig Richie, a woman left a to-go box from another restaurant on the table. Knutson followed the woman to her car to return the box to her.


"No I am good, you keep it," the woman said, according to the lawsuit. Knutson did not know the woman and has not seen her since, Richie said. Knutson thought it was "strange" that the woman told her to keep it but she took it inside. The box felt too heavy to be leftovers, Ritchie said, so she opened it -- only to find bundles of cash wrapped in rubber bands.


"Even though I desperately needed the money as my husband and I have five children, I feel I did the right thing by calling the Moorhead Police,"


Knutson said in the lawsuit. Police seized the money and originally told Knutson that if no one claimed it after 60 days, it was hers. She was later told 90 days, Richie said. When 90 days passed, Knutson was still without the $12,000. Police told Knutson the money was being held as "drug money" and she would receive a $1,000 reward instead, the lawsuit states. Lt. Tory Jacobson of the Moorhead police said he could not disclose much information about the case because it is an ongoing investigation.


"With turning this money over to us, we initiated an investigation to determine whose money this is,"


Jacobson told ABC News. "The result has been a narcotics investigation." Police argue that the money had a strong odor of marijuana and therefore falls under a law that allows for forfeiture of the money because it was in the proximity of a controlled substance, the lawsuit states. But there were no drugs in the box and Richie said he believes this law is not being used correctly.


"Because it was in contact with drugs somewhere along the line, it's somehow drug money," Richie said. "This isn't drug money."


A police dog also performed a sniff test on the money and, according to the dog's handler, discovered an odor. Two of Knutson's co-workers, along with her son Brandon, were at the Fryn' Pan the night she discovered the money. Her co-workers say they did not smell marijuana. "I know the smell of marijuana," Nickolas Fronning, a line cook at the Fryn' Pan, said in an affidavit. "I can also assure you that there was no smell of marijuana on the bills or coming from the box."


There was nothing suspicious in the restaurant when the money was found, co-workers said. They don't why it was given to Knutson. "She was just in the right place at the right time," Tracy Johnson, the assistant manager at the Fryn' Pan, told ABC News. Knutson's family has had a long financial struggle. She has been a waitress at the Fryn' Pan for 18 years.


"We do everything we can to make ends meet, but often times everything is not covered," she said in the lawsuit. Knutson's financial woes are well-known in her church, Richie said. She believes that perhaps someone from the church gave her the money through this woman but did not want to be identified.


"Somebody knew she really needed the money and she needed to be helped," Richie said.


Jacobson says it is up to the judge to decide who the money rightfully belongs to. "The police department doesn't have a decision on either side," Jacobson said. "She did the right thing, we credit her with that. It's certainly not the police department against her. We're actually with her." But Richie said he firmly believes this is not drug money and it rightfully belongs to Knutson. "The only thing that smells bad about this is that it's unfair," Richie said. "So that's why we're doing something about it."

All I can say about this is that it is hard enough to wait tables, (and a diner is probably even worse then LA restaurants,) and something like that happens?  What the hell would the police do with the money anyway?  Put it in their doughnut fund?  Chances are that they would divide it up amongst themselves and not even use it for evidence against... whomever!  And Stacy Knutson continues to struggle waiting tables at that diner.

As a server, once in a great while, you have that awesome night, when you make more money than you had thought possible in one shift.  And that makes up for any assholes you have been dealing with all the years.  The assholes turned out to be the cops.  And I know from personal experience, that cops are horrible tippers.

On a lighter note, my favorite part about this article, her co-workers trying to help out by saying, "I know the smell of marijuana."  Boys, I'm sure you do.